Child Of Fate, We Need Your Help! 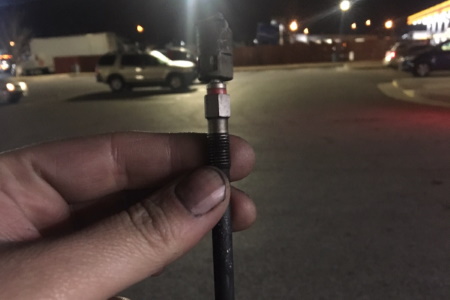 3 1/2 weeks later, as we were leaving Memphis, TN, a glow plug shot out of the head. Luckily we were near TAG Truck Center and were able to get the Sprinter to the shop. TAG inspected the damage and determined that the glow plug shot out because the threads in the head had been stripped. I informed them that I had recently had the glow plugs replaced and that I had never had any other contact with the head or the glow plugs. They informed me that this was clearly an error on the part of Mercedes of Akron. They unfortunately stripped most of the threads when they installed the glow plug. Due to the miles and pressure, the last threads that were holding the plug in finally let the plug loose.

TAG informed that the repair estimate was approximately $6000+. The reason for such a high estimate was due to the fact that there is no way to just fix the threads in the head. They would have to replace the entire head. They informed me that they would contact Mercedes of Akron and inform them of the situation.

The shock of this unexpected expense was just the first complication I had to deal with. The band still had a week of shows and couldn't afford to cancel them. I luckily found a company called Vans To Go and they rented me a 15 passenger van so we could finish our tour. This was a $1000+ rental expense that we were not expecting.

Upon finishing the tour, I returned the van and waited to hear back from TAG about the repairs. They informed me that Mercedes of Akron didn't believe they were responsible and were contesting any responsibility for the damages or repair charges

The band and I are working very hard on a new album and planning upcoming tours. This vehicle is essential for our survival and unfortunately we do not have the money available to pay for these repairs. Your donation to this GoFundMe will go towards the cost of the Sprinter repair, van rental and other miscellaneous expenses incurred by this situation. I intend to keep this active through the month of January 2020

Thank you in advance to anyone that can afford to help me and the band out during this holiday season. Your good will is very much appreciated!