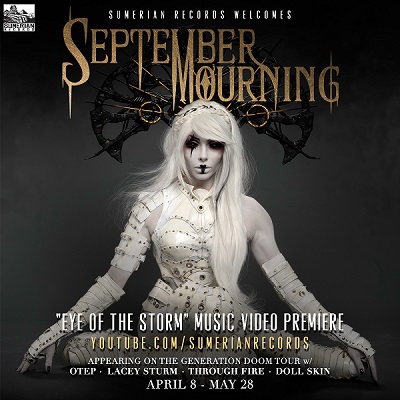 September Mourning shows that 2016 will be a very eventful year for the band and all their fans. This year marks the band joining Sumerian Records, a new single, a new video, and an announcement of their involvement in the Generation Doom Tour. All these great things and the year isn’t even half over.

The single, Eye Of The Storm, gives everyone a glimpse to the direction that this band is taking with the haunting beautiful vocals of September leading the way. The music was the foundation for other media that September Mourning is involved in as well as music. This includes their comic book series through Top Cow and their stunning visuals shown in each of their videos. The video to this new single can be viewed below as a means of hearing this new single. It is also a method of seeing the mastery that the band presents in each facet of their artistic lives that they present to the world.

If you like the video and want to purchase the audio track, it is available via iTunes. You can go directly to the iTunes page by clicking here.

In addition to all of this, it has been announced that September Mourning will be part of the Generation Doom Tour. This will be a tour that will have them joining forces with the likes of Lacey Sturm, Through Fire, and Doll Skin to present one of the premiere tours of 2016. The Generation Doom Tour will encompass April and May for all that want to see September Mourning live and hear the music first hand from one of the truly stellar music acts to come out of the United States.

Keep an eye on Music Eternal as we will give you all the details to the venues tied to the tour and any additional information coming from September Mourning.