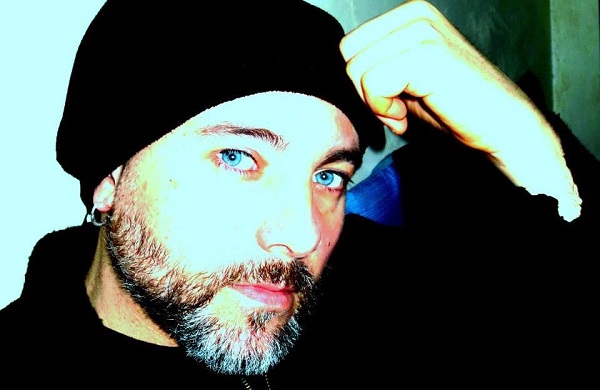 Zorama is Mariano Rongo was born in Naples (Italy) April 25, 1973 under the sign of the bull. He is a singer, songwriter, composer, editor and music journalist. He was artistically born in 2000, from the "ashes " of previous musical experiences lived in the ranks of various bands, including punk, rock and pop.

In 2001, he was selected along with Moses and Anna Tatangelo, among others, the pre-finals of the Academy of Sanremo. In 2002, he received a plaque of recognition to the " Lennon Festival" in Belper (Ct). On 12 September 2004, he performed alongside Claudio Baglioni in Viterbo. He released his first album " Circles and Semi-circles " on 30 September 2005, on SBX SoundBox Media Music label. The disc rattles in eleven tracks played and performed with courage and healthy unconsciousness, almost entirely in live ( Live in the studio ) and connected by a common thread. Just like a cocept -album, rather than drawing on King Crimson and Pink Floyd. The disc, which is overseen by the British Gary Adams and John Elliott, enjoys the participation of Niina Laitinen Finnish opera singer in the song " It 's all smoke galloping around." At the same time the song " Ke Kosi is not" inserted into the concept, won two awards at the " Rock contest Eur -Festival " in Rome. Subsequently, in the winter Zorama and his first album, thanks to the manager Paco Nucci, landed in Finland for a tour of 28 dates. Newspapers, radio and television Finns speak of the phenomenon of Italian rock. After a few months and for Zorama also open wide the doors of Sweden, Estonia and Romania.

On 28 January 2008 he released " I attend the Wind ", the second album Zorama. This time it is a concept album, but the production is much more solid and less nervous, music system is impressive, and the album, released on the label Smile Records / SounbBox / Zurich, is also distributed in digital around the world in virtual shops Itunes, Amazone, Napster, Emusic, etc.. The project " I attend the Wind ", ie the twelve songs including pop, rock, progressive and nu metal, make up the second creature of the musician Campania, is embellished by some guests as: Federico Salvatore (in " Robot of Steel" ), Freyja (Ex Lost Dream in "The devil in the Flesh " ), Saughelli (with whom he wrote and duets in the song " Between the courage and madness " a track that also will be part of the first album of the same Saughelli, " Friezes of the soul. " ), MB Heena Suman & Jimi Vistoli (in" Gusts in the middle " ) and Finland's Petri Kaivanto ( " and my head is spinning " ). With the latter, just three years after, he participates on live TV on the first national network of Finland " Yle 1 " to the TV program " Vaalimarkkinat " for the opening of the policies in Helsinki. The two artists, dressed for the occasion with historic costumes, singing the new " Paljonko maksaa ? ", Written and composed for four hands on purpose to the event, a bizarre acoustic version in Finnish "Hello Beautiful " and a ' equally particular retelling of "The Italian " by Toto Cutugno.

A few months after the singer Petri Kaivanto released his new album anthology in which there are the songs performed with Zorama, " Paljonko maksaa ? " and "Hello Beautiful." The second disc of cantaurocker Zorama, as it defines the journalist and music critic Carmine Aymone, wins the " Golden Rooster " as the best independent album of the year and, subsequently, is the protagonist of " Italian Night ", from program Radio Radio Rai International led by old Andrea Lo (Author Flack, Mina, Sanremo, etc. ). In the same period Zorama performs in Naples in Piazza Dante to the " Mu -Day", alongside Beppe Grillo, Franca Rame, Edward Jackson, Francesco Baccini, Alex Zanotelli, Sasa Mendoza, Enzo Gragnaniello, John Block, Capone and Bungt & Bangt, Enzo La Gatta & The Red Castanets and Tony Cercola. A few months later he comes back in Finland and Estonia for the promotional tour of " attending the Wind." In 2009, the songs of Zorama become the subject of study at the " Universitade de La Coruna " in Spain, thanks to a teacher of literature prof. Fernando Domenech.

In 2010, the singer Turin Walter Pradel reinterprets in his first album " Everything from Remaking," the hit of Zorama " I attend the Wind " and the unreleased song, also written by the rocker Neapolitan, "With what you tell me." A year later the same Pradel out on the digital market with five versions of " I attend the Wind." Stand the duet version with the same author of the song, and Zorama, the version for the French market, " J'adore le Vent ".

In April of 2011, Zorama receives national award " Xavier Cat" for his career. In this same period, the first radio of Finland, the " Yle Rado," goes into rotation songs Zorama. On June 1, 2011 comes out, the independent label " Maia Records ", the single " Forza Juve Ale." A sort of hymn to the form of song, composed by singer-songwriter Campania under a pure inspiration came from his passion and "faith" for the football team Juventus. Eleven days later Zorama will open the concert of the " Nomads " at the " St. Andrew " by Sirignano (Av ), and subsequently that of the " Country Cousins " in Torre del Greek (Na) and Amedeo Minghi in Capaccio (Sa ).

April 24, 2012, Zorama ' published " Involitudine ", presenting it in the picturesque setting in tuff of the historic Villa Bruno in San Giorgio a Cremano (Na). To illustrate the third recording project of singer-songwriter rock, are journalists and music critics Carmine Aymone and Michelangelo Iossa. In the new concept album, which concludes the trilogy that began with " Circles and Semi-circles ", in 2005, and continued with " I attend the Wind " in 2008, there are also some featuring as those of Varnadi, Aldo Granese, Laye Ba, Luna Di Nardo and Jen & Spider of resurrextion. In addition to a song written with Franco Migliacci, one of the " pens " historical Italian music, for having written, among many others : " In the blue painted blue " better known throughout the world as " Volare", brought to success by Domenico Modugno. In the autumn of the same year he released " CalmaTempesta " for the indie label " Maja Records ", the new album by Walter Pradel joined by revived Rondo ' Veneziano, under the name of Rondo ' Anthology, which Zorama signing the text of the individual " Another music ", a song that appears in a video clip meticulous attention to detail, even on MTV. Subsequently released the new album of the singer Varnadi, " Protester Romance", in which care Zorama the pre - production and harmonies of six songs.