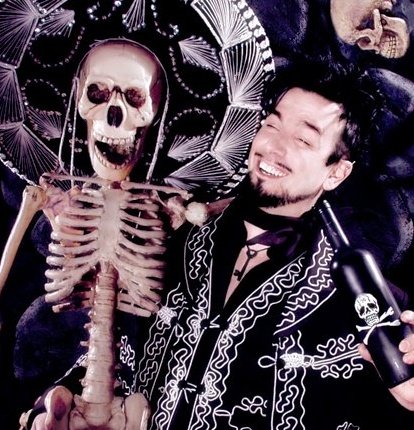 Voltaire is often described as a modern day renaissance man. He is a singer/ performer, creator of comic books, animation and toys.

As a musician, he is a songwriter whose music can best be described as a collection of murder ballads, tongue-in-cheek exercises in the macabre, with just enough bawdy songs about Star Trek and Star Wars to keep a Con audience rolling in the aisles. Many know him for his song "Brains!" from the Cartoon Network show "The Grim Adventures of Billy And Mandy". Voltaire's live shows, whether solo or with his skeletal orchestra, are highly theatrical -full of stories and games. The theatrical quality of his performances is not surprising; Voltaire has been directing commercials and animating short films for the last twenty years.

Inspired by the films of Ray Harryhausen (Jason and the Argonauts, The 7th Voyage of Sinbad), Voltaire began animating at the age of ten on a super8 camera. At that time, he says, "no three dimensional object was safe. My brother's action figures, my sister's dolls, silverware, etc . . . If it was missing, chances were that it was in the basement in front of my camera." Voltaire has created dozens of animated spots for MTV, The Sci-Fi Channel, and many more (including most recently Fangoria TV).

Eventually commercials proved to be too short for his storytelling desires and so Voltaire embarked on a new career as a comic book creator. His first comic book series, "Chi-Chian" (a dark Cinderella story for the 31st century) was picked up as an animated web series by the Sci Fi Channel's website (www. scificom/chichian). It won The Flash Forward's People's Choice Award and greatly widened Voltaire's audience.

Other notable comics and books by Voltaire include "Oh My Goth", "What is Goth?" "Paint it Black-a guide to Gothic homemaking" and most recently, "DEADY". The latter includes collaborations with Clive Barker, James O'Barr, Neil Gaiman, Billy Tucci, David Mack and many other luminaries of the spooky comics realm.

In 2004 Hong Kong's Toy2R introduced Voltaire to the world of urban vinyl by making a toy of his comic book character, DEADY. It was an instant hit and lead to a string of other Voltaire toys including a line of "Pocket Goth" plush toys for Toy Network that can be found at all major amusement parks and crane machines at Walmart, Toys R Us, etc..