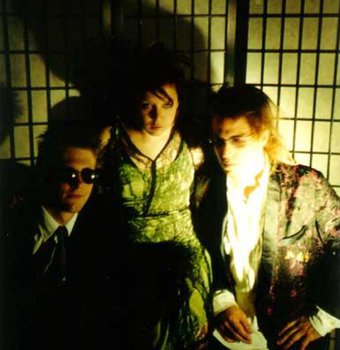 On an accelerated wave of activity following the success of their Kickstarter album campaign, Trance To The Sun performed their first shows since 2007 this past January. Seattle's El Corazon saw TTTS on January 11, while Portland's Star Theater hosted them on the 12th. Both shows were very well received.

Trance To The Sun plays their own brand of darkly imaginative post-punk psychedelia, spiced with elements of dreampop & shoegaze. Beginning life with a self released cassette in 1990, TTTS expanded their membership & oeuvre over the course of the next decade, assembling a dreamy treasure trove of 7 albums plus numerous compilation one-offs. Along the way they captivated and mystified their following with a succession of three equally compelling female lead singers, band leader Ashkelon Sain connecting finally with the snake charmer talent of Ingrid Luna Blue to write and record such cult favorites as "Thistle Lurid", "Execution Of The Stars", and "Homewrecker".

In 2002, Sain put the project to rest for a while and relocated to Portland, Oregon, launching a new band (Submarine Fleet), falling in with TheXplodingBoys (Cure Tribute), and eventually recording two noteworthy albums with Soriah. In the meantime, with Trance To The Sun's audience only expanding in their absence, and with the successful re-release of some earlier catalog works, the core band members felt the time had arrived to create some new material.

A very productive demoing session in the Summer of 2013 led to the enlistment of drummer Daniel P. Henderson (TheXplodingBoys, Soriah), and the initiation of what was to be a highly successful Kickstarter campaign. Backers of the project have since been privy to new demo collections, candid interviews, and re-recordings of older material as the band gears up to undertake their first shows in nearly 7 years.

Winter of 2014 has found the band immersed in recording, with Ingrid Luna Blue travelling to Portland from the band's old stomping grounds of Santa Barbara, CA (and getting married between sessions to one Terry Luna; imminent touring bassist for the group). Meanwhile, Sain & Henderson hired out Portland's own Magic Closet Recording Studio, with engineer Ian Watts overseeing the details of their instrumental tracking.