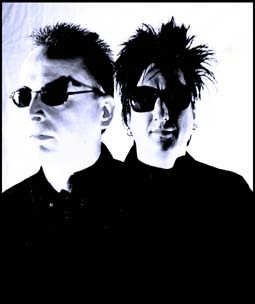 Blending influences from the alternative 1980's with current electro sounds RAZORFADE is reinterpreting alternative electronic music for those with a darker side.

A pioneer of UK electronic alternative music in the 1990's, Mark Tansley was the creative brain behind legendary underground band SUSPIRIA and the later side project INTRAVENUS.

Clifford is best known as the singer for 1990's Australian band SUBTERFUGE and was also one half of the side project JERUSALEM SYNDROME. Clifford Ennis is also former guitarist for internationally acclaimed band IKON.

Between them, Mark Tansley and Clifford Ennis have released many CD's and have toured extensively, having performed at some of Europe's largest alternative music festivals as well as playing at hundreds of venues across Europe, the USA and Australia.

Mark and Clifford paired up in 2008 to create RAZORFADE.

RAZORFADE's debut CD, the 'Liberation EP' was released in mid 2009 and showcased the versatile song writing talents of the Tansley/Ennis duo.

RAZORFADE have since signed a record deal with Belgium based label ALFA MATRIX and the debut album "This Clear Shining" should be released towards the end of 2010.