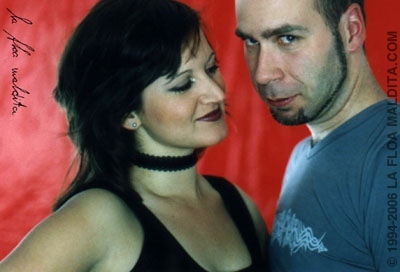 The History Behind The Music

La Floa Maldita was founded in 1992/93 as a musical project with the intention to do movie scores. Soon, with the encounter of Rhea the project turned into a real band. We tried to create an intimate , misfit atmosphere with the first cd, totally self-centered.

The Faces Behind The Music

"La Floa Maldita" is a term that farmers in a South American country use for the nice flower poppy, which is used to produce narcotics that can cause addiction and death. That certain term came up to my mind, when I was in a bad personal situation with some friends and I wanted to draw a line between them and me.

....the nice flower that cause death. Like our songs with are not predictable, start silently and turn into something bigger, which differs from the "scene soup sonority".

We are a music group from Germany and describe our musical style as "chanson électronique", which means we use lots of electronic devices and a female voice to create somehow unconventional timeless songs and tracks. Heavenly voices is another term that would describe at least parts of our idea, but our music is far beyond that.