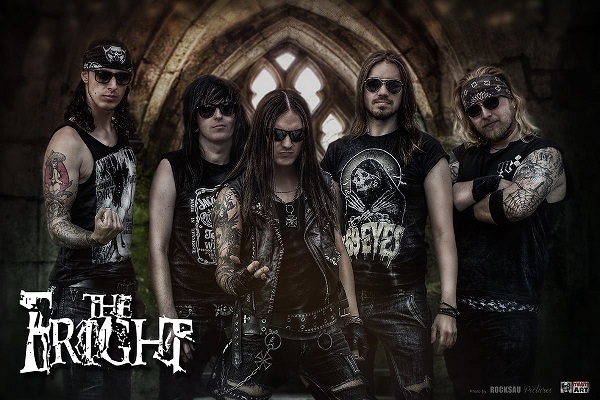 As a teenager you need to find a way to deal with grief and loss when you lose your dad really young. Ten year old Lon found it in 1999 with wrestling shows from America and especially in the character of Vampiro. Little Lon was so impressed by the professional wrestler that his mom had to buy him a Misfits record because Vampiro was touring with Misfits at the time.

Combined with a growing passion for horror movies and the fact that his older brother infected him with punk rock, Lon founded The Fright in 2002 near Jena with bass player Kain and drummer Noiseferatu. In 2003 he made his first stage appearance as a singer and guitarist and the band also recorded their first demo record. Thenceforth everything went really fast in the small (manageable) horrorpunk scene: together with The Other, Chrimson Ghost and other bands, they played at the first horrorpunk festival in Germany and demonstrated their presence nationwide.

The debut record „Dacabre“ was recorded single-handedly in 2007 with their new drummer Seares and published on Contra Light records. The influences of Misfits, Samhain and Danzig were really noticeable, nothing The Fright wanted to shun anyway. The following record „Born To Be Dead“ came out matured and a little more rock’n’roll. To help Lon concentrating on the singing, guitarist Danny joined the band.

He made his debut on the tour with Ghoultown in Germany and Eastern Europe, during which they rocked the stage with bands like Lacrimas Profundere, Hardcore Superstar or Babylon Bombs. In 2012 they released their third record „The Fright“ via Fiendforce Records – which clearly showed that they turned their backs on horrorpunk. From now on Sleaze, Gothrock and Hardrock is what they’re going to play.

After the Hellnights tour with Blitzkid, The Other and the Bloodsucking Zombies they went and toured Poland with the The 69 Eyes at the beginning of 2013. With Kane they got their second guitarist and the band was then considered complete. But things never turn out the way you expect. Drummer Seares left The Fright because he was becoming a father and as soon as the last concert with him took place, the guys were left without a Label or rehearsal room.

Instead of giving up, they hung in there and again single-handedly produced their fourth album „Rising Beyond“, with Jyrki (The 69 Eyes) and Goolsby (Blitzkid) providing guest vocals. Furthermore they started a crowdfunding campaign, to finance the recording and the merchandise for their fans. Having the new drummer Luke Seven in the band permanently means the release of the new album „Rising Beyond“ in 2015 is on schedule.