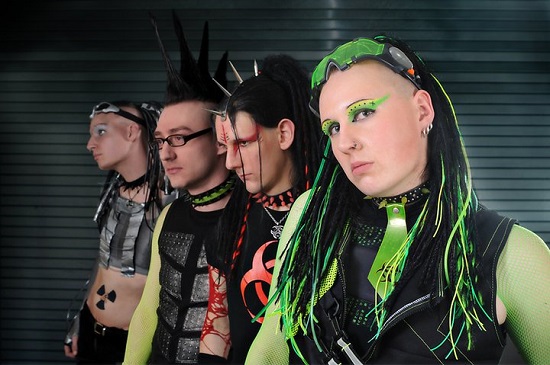 EXTIZE was created in 2007 through the French song writer and interpret Cyb3rella. It began as a solo project. EXTIZE became a band at the end of 2007 as Cyb3rSlut (E-drums), Ionic Matrix (synthesizer and guitar) and Cyb3rc0re (sampling) joined the project. Their first club hits Poser and Hellektrostar are released in 2008 on the German well known compilations Extreme Störfrequenz 1 and Extreme Sündenfall 7. The band joined the label Trisol Music Group the same year thanks to the success of both songs.

EXTIZE released its first EP Hellektrostar EP in 2009. It stepped in the German Alternative Charts (DAC) on the 14th place and defended it near to 2 months. An interview of the band was published on the German gothic magazine Orkus together with a cover picture. EXTIZE was one of the bands which was at the origin of the gothic subculture cyber-gothic and is regarded as a pioneer of the German Cyber-Gothic subculture. EXTIZE released its first Album FallOut Nation few months after Hellektrostar EP. EXTIZE performed its first live act at 29th January 2009 on the stage of the Dark Dance Treffen in Lahr (Germany) together with bands like Reaper, Faderhead, SAM, Eisenfunk, Henke and Diorama.

Cyb3rc0re left the band at the beginning of the year 2010. DJ Barus took his place in the band. He was already well-known in the scene as he created the podcast "Dark E Mix", which was the most downloaded industrial podcast on Itunes. EXTIZE began its first tour at the beginning of 2010 in France, Switzerland, Germany, Belgium and Greece. The band played on the stage of the biggest gothic festival in the world, the Wave Gotik Treffen in Leipzig – Germany at the 29th May 2010.

The second single of the band Gothic Pussy was released in June 2010 together with the homonymous video clip. EXTIZE TV was on air at the same time. It offers the fans some tour videos, lives, backstage etc. After the release of this second single, EXTIZE played on the stage of the Amphi Festival in Cologne in Germany the 25th July 2010. The band was headliner of the Essen Originell festival in Essen, 2010. During this performance, the band announced the coming release of its second Album.

The band released its second album Paradize 2069 the 25th February 2011. It was firstly offered as digipack edition limited on 999 exemplars. It contained 2 CDs ("Hell" and "Heaven") each one with 15 titles. Paradize 2069’s concept is based on a science fiction story which the band wrote and recorded as audio book downloadable on www.paradize-2069.extize.com. This website has been specially created for the new album. The group slowed down its music style with this new album and the second CD « Heaven » which is nearer to Darkwave and Synthpop, instead of cyber and industrial. In addition, EXTIZE uploaded a small quiz which allowed the fans to download six unreleased songs (2 demos from 2007 and 4 remixes). Thanks this album became EXTIZE the best band of february of the magazine Orkus. The band released its second music video Headquake shortly after this second album. 2011, Ionic Matrix left the band and has been replaced by Jan Dysfunction at the guitar and synthesizer. The new member of the band has been officially presented on a live performance in the Crash club in Freiburg - Germany. The EXTIZE DJ Team won the Cyber-Culture Music Award 2011 (CCMA) in the category "best national DJ" in Essen - Germany. At the end of 2011, the band released a new video and made a tribute to Gala Rizzatto. The reason was that EXTIZE covered the hit Freed From Desire and offered it to their fans as free download on their website.

The band released a new EP in March 2012 named Arschloch EP together with the fourth music video Arschloch Alarm, which became a hit in the german gothic clubs. Arschloch EP stays two months at the 10th place of the German Alternativ-Charts (DAC).

The band decided to change its orientation in august 2012. Cyb3rSlut left the band, and the rest of band decided to change the music genre which becomes a mix between breakbeat, nu-metal, industrial, future pop, dubstep, electro-rock and hard electro. They called this new style ''Dirt-E-Tronic'' and changed their label in order to release their third album Anarchy Engineers. Anarchy Engineers has been released on 13th October 2012 by the label Future Fame. At the same time, EXTIZE released their fourth music video Kiss & Kill in collaboration with the tattoo model Rachel Rampage and the fetish photograph Michael Fromberg.