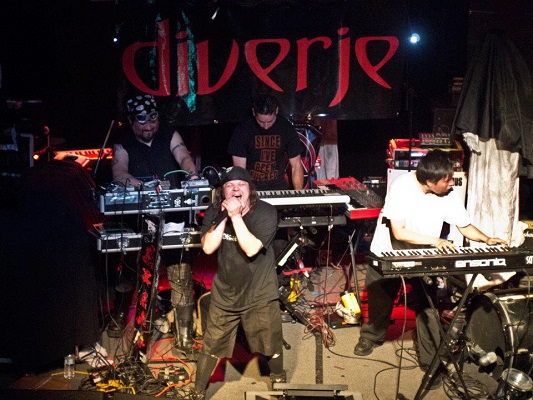 Diverje was started by Tommy T, front-man of DSBP Records, in 1996. The band started as a metal/industrial hybrid and has mutated since to create a powerful Industrial/electronic hybrid unlike those currently found in the popular music circuit. In the Studio, Tommy T creates the many layers of Industrial and electronic rhythms and melodies, as well as providing vocals, programming and production for Diverje’s many releases. On the stage, Diverje is brought to life by NINO BROWN(GUITAR, KEYBOARDS), BUDDY LOVE(KEYBOARDS), KENNY(NOISE TREATMENTS,DISTORTED BEATS). Diverje aims to provide one of the most energetic and entertaining live performances of Industrial music seen on a stage, and delivers on all fronts, having shared the stage with Chemlab, Skinny Puppy, Armageddon Dildos, Imperative Reaction, Hocico, and many other staples of the Industrial and Electronic music world.

Diverje has many releases to its name, including the 2002 release “On Skin”, which was met with great acclaim by the Industrial community, featuring a wealth of dance and harsh industrial tracks to get dance floors moving in songs such as the titular track “On Skin” and the opening “Regret”. The next album, “2:40AM”, features a number of remixes from “On Skin” by some of Industrial’s most well-known acts, including Razed In Black. 2003’s “Amphibian” explores some of the darker and more ambient textures of Industrial as a concept album built around industrial frogs (indeed!). Songs such as “Stronger” and “In2thetrap” explore political and emotionally charged lyrics and sounds unlike that of many Industrial records.

2005 saw the release of “The Distortion Chamber Vol. I", a harder and more aggressive album with more guitar and electro-industrial anthems, and even more conviction and anger. The album definitely brought DIVERJE back into the top tier of underground bands doing live and studio work and with one of the most energetic shows in the land.

In 2007, the band released “Stitched", with 11 brand new tracks with more aggressive electro/industrial, EBM with powerful rhythms and anthemic/harsh vocals. This album has a more matured feel, and more of a live sound incorporated in the energy of each track. There are some gems on this album such as "Smell the blood", "Stitched" and “Evil One”, and a lot of sounds for those looking for something to get their blood moving.

What’s in the future for Diverje? Having solidified themselves as a staple in the Underground Industrial scene, Diverje will continue to release more powerful music, and provide a great live show to back it up. 2010 will see new CD releases, more live shows, and above all, growth. Diverje is about doing what no one else is doing, and doing it well. Catch a live show and see why Diverje is the best at what they do.