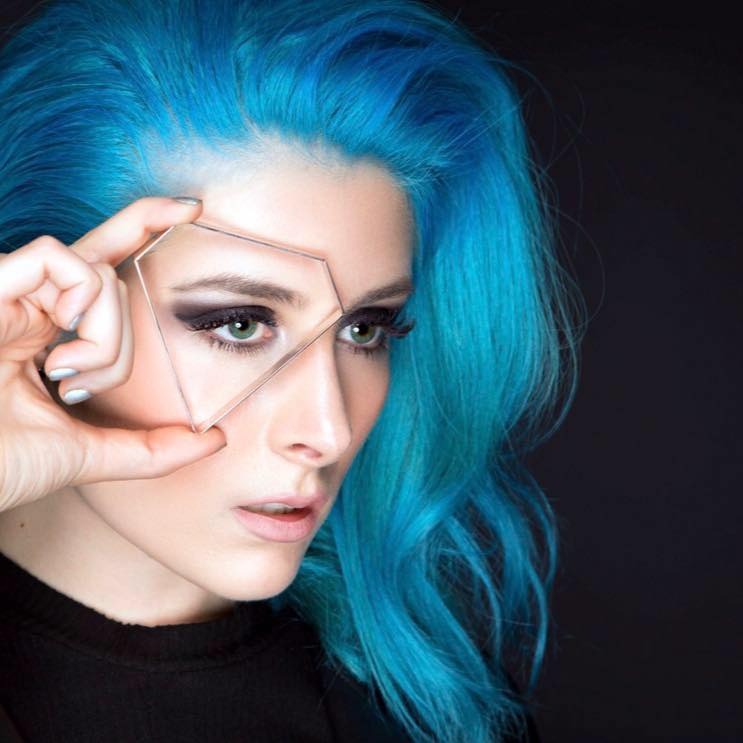 With iridescent sapphire hair, a show-stopping voice, runway-ready fashion swagger, and an empowering message, the Boston-raised and Los Angeles-based Mexican-Italian-American sonic heroine brings a new (and blue) fire to rock and alternative music. Serendipitously, her name might as well have pre-destined a future in the spotlight…

“In Spanish, Diamante means ‘Diamond,’ and my middle name Azzura means ‘Blue’ in Italian,” she explains. “If I was a color, I would be blue. I love it, because it’s bold, ethereal, and everything I am.”

Born to an Italian dad and Mexican mom in a Boston suburb, she always stood out. Interchangeably speaking three languages—Italian, Spanish, and English—she found inspiration in words, penning poetry and short stories at a young age inspired by J.K. Rowling and Stephen King. Drawn to musical theater, the budding performer starred in school productions of The Little Mermaid, Grease, and more before relocating to L.A. with her family at 13. Already a fan of Kelly Clarkson and Avril Lavigne, her discovery of rock music via a School of Rock summer program ignited a dormant passion.

“Being on stage and singing rock was the way I broke out of my shell and was able to realize who I am and the full potential I have,” she admits. “From there, I really connected to the women of the eighties like Joan Jett, Pat Benatar, and Debbie Harry. I thought they were so cool, iconic, and badass. That’s how I wanted to be.”

Diamante spent the next few years quietly cutting her teeth at local gigs on the Sunset Strip as a singular musical vision came into focus. A disciple of both P!nk and Guns N’ Roses who doesn’t fall into rockstar excess or even sport tattoos, she devoted every waking minute to honing a signature “classic rock sound with a modern alternative edge.” This unique and undeniable approach caught the attention of Eleven Seven Music Group and Better Noise Records who signed her in 2015. Amassing a bevy of ideas, she hit the studio with super producer Howard Benson `{`My Chemical Romance, Chris Cornell, Halestorm, Kelly Clarkson`}` to record what would become her full-length debut, Coming In Hot. “Diamante is the only true heir to the female rock throne that has been vacant since Joan Jett’s heyday,” says Howard Benson.

“Howard really pushed me to be vulnerable and talk about things I was afraid to talk about,” she goes on. “I finally got the courage to be honest with my lyrics and myself. I want to be someone girls and guys growing up can relate to.”

Her single “Coming In Hot”—out June 16, 2017—seesaws between an arena-filling chant and a robust and raucous riff. At the center, she confidently serves up the knockout refrain, “Whether you’re ready or not, I’m coming in hot!”

“It’s essentially a super fun weekend summer anthem,” she smiles. “I picture people leaving their day jobs in the car on a Friday, cranking this, and getting ready to go nuts on the weekend. It’s also a metaphor for me coming in hot into the industry. I want to bring this style back and take over rock.”

In the end, rock ‘n’ roll has never sounded, looked, or felt like Diamante on Coming In Hot.

She leaves off, “When people hear this, I’d like for them to think, ‘Oh my God, rock is not dead. This girl is bringing it back’—whether they’re ready or not…”