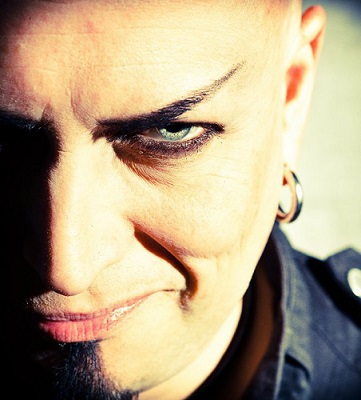 SINCE MATERIALISING IN 2004, Jay Smith's Deviant UK has established itself as a force to be reckoned with on the European Dark Alternative scene. The long-awaited debut album 'Barbed Wire Star' was released in September 2006, spawning the anthemic club hits 'Raptured Saints' and 'Access Denied!'. Their unique sound is powerful, distinctive and instantly accessible.

This band is defined onstage - perpetually on tour, they have taken in the length and breadth of the UK, Mainland Europe and much of the USA [opening for Project Pitchfork on their 18 date 2009 tour and a 24 date headline tour in 2012].

Quintessentially English and proud of it, Deviant UK is masterminded by devilish singer, songwriter and frontman Jay Smith ("a true showman with an ego the size of a planet" - Rocksound Magazine). On the gothic scene, this is as close as we have to the cartoon pop star, a self-confessed minor celebrity who never fails to provoke a reaction from the underground scene he calls his own, never fails to entertain. With tongue often firmly embedded in cheek, Smith is nothing if not self-aware of his own caricature.

Musically, this is dark synthetic pop with a black granite heart, fusing pumping electronics to dancefloor beats while Smith's snarling, angst-ridden vocals coat every song in ice. It is this very understanding of pop science that stands Deviant UK head and shoulders above their peers.

Driven by distinctive imagery and huge stage presence, the influences are worn proudly on the sleeve but Smith has developed a unique sound that is instantly recognisable. With an unwavering belief in the value of the 'pop star' Smith engages audiences head-on with an overwhelming confidence that is equal parts arrogance, charisma and psychosis.

The aptly-titled and hotly anticipated second Deviant UK album 'Very Bad Things' arrived in February 2011, preceded by European club hit 'Wreckhead' [featuring remixes from the likes of Grendel and Assemblage 23]. Both releases topped the alternative charts in the UK and earned superb critical acclaim from the press.

The Deviant star continues to rise meteorically with more to come. Proven to be able to stand shoulder-to-shoulder with scene heavyweights, whether on these shores or commanding the stages of Europe's major festivals, new material showcases another confident stride forward, compounding the electronic rock swagger of Very.Bad.Things & pimping it's ride dramatically. You want subtlety? Then you will be disappointed; instead you can expect an electronic pop band with too much attitude and big balls.

With a third album and European & US tours planned for 2014, the whole circus seemingly fuelled by an even greater enthusiasm, idiosyncratic talent and unparalleled showmanship, Jay Smith has dragged Deviant UK into the major league...don't bet against him.