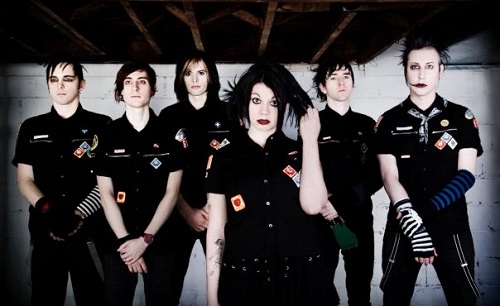 The Birthday Massacre is from Toronto, Canada. Combining their interests in various musical and artistic styles, the band has successfully accumulated an impressive international fan base, press accolades, and defied categorization with their unique sound and visuals.

The band was formed in 1999 and independently produced and recorded their first two albums, Nothing and Nowhere and Violet. Through both of these high-demand releases, as well as their highly acclaimed and beautifully atmospheric website, the band obtained a large and loyal fan base throughout the world. Due to their independent success, in 2005 they were approached and signed by Metropolis Records and the band began its steady climb to reaching a much wider audience with the 2007 release of the acclaimed and wildly popular Walking With Strangers.

In the last few years, the band has been performing internationally, traveling extensively across Canada, the United States, Mexico, Australia, the U.K. and Europe. They have become renowned for their high-energy live performances, drawing large, mixed crowds through their appeal to fans of a surprisingly wide range of genres. Equally comfortable playing intimate venues as they are on a festival stage, the band's highly-praised performances will continue into the next year as they continue touring.

Their fourth full length album "Pins And Needles", released September of 2010, landed on the Billboard Top 200 chart and in the top 10 of Billboard's Heatseekers chart.

Currently, the band is writing and recording new music and preparing for shows in 2011.