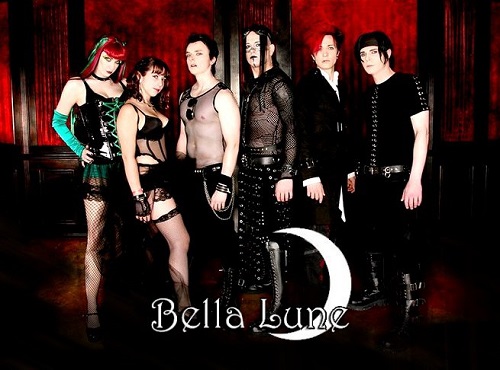 The band's first album, Abstracted Visions, was released in 2007 on the band's own record label, Aetheria Music. The album drew comparisons by critics to bands like The Cure, Cocteau Twins, and Switchblade Symphony. Abstracted Visions relies on delicate synth and guitar patterns to weave somber and ambient atmospheres. The band also released music videos for three songs--"Transmissions," "Neverwhere," and "Blissful Escape."

The live band was formed in 2008 when Hurley was recruited to play live synths and help with production. Violinist Beeka and drummer R. Duke both joined Bella Lune in 2009.

Synesthesia, the group's second album, was released in 2010. In the same footsteps of their debut, Synesthesia drew further comparisons to bands well known within dark alternative circles. It also opened them up to a larger, international audience. The band created music videos for "The Dolly Pop Song" and the fan favorite "Ophelia."

Following the release of Synesthesia, Dy was recruited to play guitar, completing the live ensemble. His first show with Bella Lune was in Tokyo, Japan. Shortly after the Japanese tour, the band released the popular “Ophelia Maxi-Single” which featured remixes by Daniel Myer and several others, along with a Joy Division cover. In October 2012, the band completed their first European tour, which included a performance at the Bram Stoker International Film Festival in Whitby, England.

The third album Secrets, released in 2013 saw a shift in direction, toning down the electronics and bringing a more organic sound to the forefront. The last track on the album is a live mix of "Transmissions," featuring heavier guitars and percussion, as well as a violin outro. This is the last album to feature founding member Kal3id