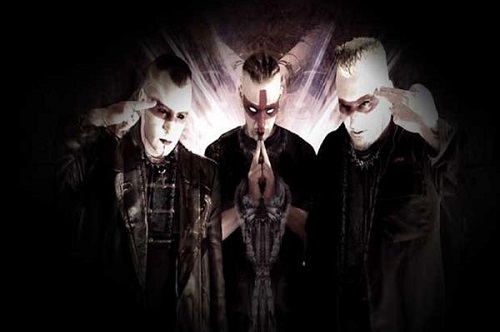 Welcome to the Splatter-Disco! After front man and psychotic stage presence Chris L. has produced a shower of sparks while power sanding the metal parts of his stage outfit, pierced half a dozen needles through his limbs and covered the audience in a fountain of stage blood, it should be highly unlikely that anyone in the audience will leave the club thinking that Agonoize is “just another hard Electro band.” Their explosive live show has probably played a significant part in the rather fast rise to fame of the mad trio from Berlin, Germany. But Mike Johnson, Oliver Senger and Chris L. are also experts at writing tunes that are aggressive and catchy at the same time. All being veterans in the business, they have the necessary production know how that will assure that their songs come out sounding like a blast as well. The perfect ingredients for an almost instant success…

Founded in 2002 by Mike and Oliver, Agonoize quickly found a front figure that will deliver their electronic thunderstorms with the necessary zest in Chris. Their first album “Assimilation: Chapter One” and the accompanying EPs “Paranoid Destruction” and “Open the Gate/To Paradise”(all re-issued as one bundle on “Assimilation: Chapter Two”) were quickly becoming favourites of the hard Electro scene. On the live side of things, success also came with a buzz having the band play their debut show at the Dark City Festival in Edinburgh, Scotland, alongside well-established acts, such as VNV Nation. Tours around the world were to follow which had them play every major festival in the scene and brought them as far as Tel Aviv, Israel. It didn’t take too long until the boys had shared the stage with virtually anybody who has a name in the scene.

In the studio, the group was very active as well, as the steadily growing fan base was longing for new material. Thus, the band recorded two releases in 2005: the EP “v 2.0 – Evil Gets an Upgrade” and the smashing double album “999” – both receiving a lot of positive feedback and kudos from the press and the fans. In 2006, Agonoize followed up with the limited EP “Ultraviolent Six” (already a highly collectible rarity!) which included the massive club hit “Koprolalie” (with the infamous shouted out line that includes a seeming invitation to copulation.) In between their live stints, they went back to the studio to record an adequate follow-up long player to “999” in form of "Sieben"… and, knowing the band, it was to be expected that it has some darn hard stuff in store for us again. The overall harshness factor was increased and, lyrics-wise, the band happily crossed all the borders of political correctness with a big grin. Fortunately, the guys are always very tongue-in-cheek, presenting their lyrical assaults with just the right amount of irony.

The next strike followed at the end of 2008 with the EP "For The Sick And Disturbed." With their trademark mix of aggression, catchy hook lines and a lot of humour, Agonoize cunningly pushed their sound to the limits and have recorded the hardest hit tune of their entire career in form of "Schaufensterpuppenarsch." The Berlin Bad Boys rounded off the package with some searing remixes, thus proving once again why they are considered one of the hottest acts in the Aggro-Electro-scene. Pop Music for mass murderers in the slaughterhouse-disco ... on the Out Of Line Festival Tour 2008, Agonoize quickly changed any club into a boiling hell. A new album is in the works for late 2009 that will continue the extraordinary success story of this mad trio.

Agonoize have a lot of charisma and are completely mad and over the top… in a highly entertaining way… and their sound is massive. It is, thus, highly probable that the number of people carrying tattoos of the band’s logo (a head with two fingers pointing towards its temple in a suicidal gesture) roaming the streets and clubs will increase to epic proportions.