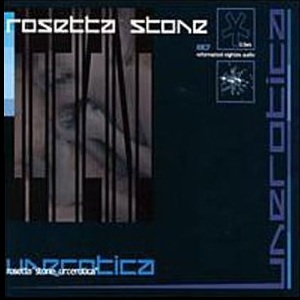 This Two Cents is on Unerotica by Rosetta Stone.

This was the one Rosetta Stone album that was originally not planned on being a Rosetta Stone album. At the point this album was made, the band was pretty much gone and it was a solo creation of Rosetta Stone front man Porl King. At the time the band still had a  contract with the label they were on and Porl pushed to have it be his first solo release, but the label showed that this was not the wised avenue since the band had better visibility than he did alone.

Perhaps the irony in this is that if the label had not put the focus on this being the final Rosetta Stone album, Porl may never have formed Miserylab. That is one of the questions that may never be answered, but if anything Unerotica is a true album that shows where Porl came from and where he was destined to go with music.

Unerotica is an album of remade songs from artists such as Talking Heads, Tears For Fears, and Gary Numan. Many of these remakes are unorthodox, but there are a lot of them that are truly impressive. The remakes of Are Your Friends Electric?  and  Road To Nowhere are perhaps even better than the originals for a number of reasons. This is not to demean the originals, just that Porl gave these songs a new shot of vitality that only he could provide.