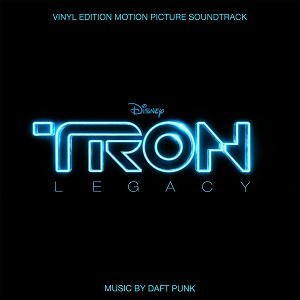 The first Tron movie has the skills of Wendy Carlos which led to a soundtrack that helped direct a movie that would lead to a series of games, comics, and books. This first movie was one that opened the possible world that could exist in technology. Perhaps the movie was off in a literal stand point, but it was true in a world that is naked to the unseen eye. A world that thrives in the technology of today.

Tron Legacy carries the movie onward with the story, and the evolution of what this virtual world is. Wendy Carlos wasn't involved in the new albums, Disney has another set of minds that were planned for this masterful stroke. These minds were the duo of Daft Punk. The band created a sound track that set the tone of the movie and yet still paid homage to the original movie. The soundtrack gave the tempo of many of the scenes without seeming cheesy and without dominating the movie itself. If anything, the movie and the music were a harmony in presentation and tone.

Daft Punk has always shown they were masters in Electronic Dance Music, but Tron Legacy wasn't a dance movie and had a depth in plot that was masterfully reflected in the score. Some parts were similar to themes within the Matrix scores and in some of the classical compositions of the past. Even with these similarities and links to the older music, Daft Punk showed a new avenue in the music. Their new take led to a music that was heartfelt, passionate, and also dark in many parts. The music guided the viewer of the movie with what was expressed in melody. This made the movie where there could be moments where nothing was said, and still volumes were expressed by the actors and the music.

It is fitting that a movie that was symbolic of technology and also the evolution of special effects would have this duo at the music. Daft Punk has always set a standard in their visual effects in their concerts and the movie was an extension of them style.