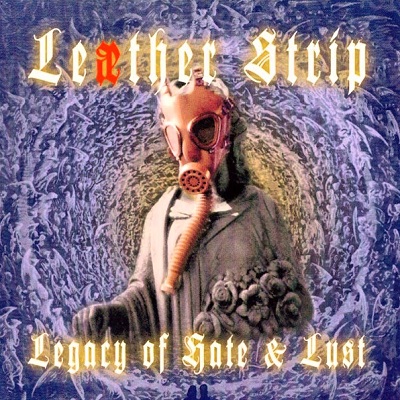 Who (Band): Leæther Strip has been viewed by many as one of the core pieces in what Electro-Industrial is today. This is the primary project of Claus Larsen and has been the lightning rod for inspiration for labels and musicians worldwide. His style, direction in music, and creativity has been hallmarks of Leæther Strip which has in turn been a bar for other musicians that aspire to have any impact in their sliver of the music world.

There are few musical acts like Leæther Strip that have toured worldwide, released the amount of vast library of music, and have still kept everything that is new fresh for the fans. Most times a band will either have to reinvent themselves or suffer when their well of creativity runs dry. This is a challenge that Leæther Strip has never shown and the countless fans of Electro-Industrial are forever in Claus' debt for it.

What (Band): As stated above, Leæther Strip was in many eyes one of the key starting pieces in Electro-Industrial music. Many bands will continue their select path and never sway to explore what else is there. Some like, Leæther Strip, take the defined boundaries and show why they are not needed. The music in this band will encompass a wider scope than the "proper definition" of what Electro-Industrial is as a genre. This for some musicians is dangerous as they will push boundaries that sometimes make the direction of the band different than what was envisioned. Claus Larsen has had a keen vision in his music and for this he has developed a distinct style in Leæther Strip that regardless of the song you know you are listening to one of his creations. To expound on this point, Claus works on many projects in many other bands, yet his direction and the identity of Leæther Strip is never lost in the music made. Some will say this is something he has made painstaking efforts in making possible, but it is more likely that Leæther Strip is the child in the loving union of Claus and what he sees in music. This unity is expressed fully in Leæther Strip and that is what makes the music so potent in its powerful lyrics and dominating beats.

Why (Song): Many of the earlier songs in Electro-Industrial have had a bit of a hard edge in their beat and an aggression in the lyrics. Down There With You has an almost somber undertone that combined with the haunting lyrics gives a vision through the melody that stands alone from most songs in this genre. It also stands out from many of the earlier Leæther Strip songs as it hits shows a unity in the lyrics and melody, but in a fashion that carves deep into the heart and sears the soul. Where many of the songs would give a more aggressive dance vibe, Down There With You has a melancholy that is down tempo and perfect in its own right.

Where (Song): Down There With You song is perhaps one of the rare songs that can fit into a multitude of styles and genres of music. The mellower beat makes it ideal for slower Industrial, Dark Wave, and even some of the more electronic Gothic Rock. The song can even fit in more mellow and saddened themed songs in Alternative music. The fact that the song pulls from many elements in many genres makes it a superb transitional song for those that love to do compilations, festivals, or DJ Sets that are more peaks and valleys or touching more than one genre base in an overall playlist. This aspect makes Down There With You a perfect song for a transition between DJ's or if you just want to end an set of music with a mellower tone that will stay with the listener even when the music is over.