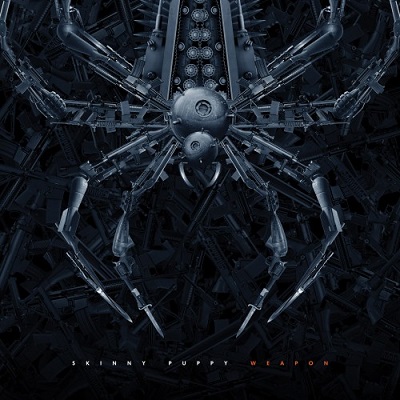 Who (Band): Skinny Puppy is one of the iconic bands for Electro-Industrial and Experimental music. They have been one of the key bands in bridging both genres together and with other genres. Their music has been one of the standards for bands in the Electronic world that strive to have a visible value in the global music market.

What (Band): There few bands that have nailed down success, presented a depth of meaning in their music, and have entertained fans with the creative expressionism in every aspect. Among that short list of elite bands is Skinny Puppy. The band has had performances that have entranced the fans with the visuals and dominated the minds through the ears with the energy in the music. Many bands strive to be part of a trend, when it comes to Skinny Puppy, they make the trends that guide Electro-Industrial music. This has made each release by the band groundbreaking.

Skinny Puppy also is one of the few bands that use the music as both a means of creative expression of their talents and in many times as a method of opening the eyes of their fans to what is going on in the world. This combination melded into one band that has thrived for as long as it has shows the true genius in Skinny Puppy.

Why (Song): Salvo is a perfect representation of the many layers of what is Skinny Puppy in one song. Of all the new songs by the band, this is one of the best to show, in a nutshell, what Skinny Puppy is in style. The song also gives a fundamental presentation in terms of tone and feel that is similar to much of the music in the lead singer's side project, OhGr.

Where (Song): Skinny Puppy's music has always been one that can fit in any radio show or dance club that caters to Electro-Industrial. Where Salvo stands out is that it also hits many of the related genres that are more a kin to OhGr. These genres would be EBM, hard Dark Wave, some Synthpop, and even harder edged Ambient music. The fact that Salvo has a dynamic that touches many other genres in how it presents itself makes it a song that has flexibility in how it is presented. This is much like Worlock or some of the variations of Assimilate.

How (Song): The album Weapon, as a whole is a superb album. Salvo is a perfect representation of the stellar music that the band has made in this album, but the song has other merits to it. The fluid feel is where it can appeal to other fans of Electronic music and get their "feet wet" in what is in Skinny Puppy's music is a huge point to present. Some of the secondary pints that the song presents is the grittier elements that are in many of the songs the band has released, an aggressive undertone, and sampling near the end. It also shows a feel to the music that is less pounding in rhythm and more flowing in how the synthesizer controls the tempo to the listener. This aspect is more common in many of the other genres and gives Salvo a quality that easily makes it leap ahead of most other songs.

Anyway you mix it you can't go wrong. Skinny Puppy has always been one of the true standard's in Electro-Industrial and this song is proof why this isn't going to be changing anytime soon.

Draven Taylor's Note: Skinny Puppy is one of my personal favorite bands. I have had the honor of chatting with Ogre in the past and consider him to be one of the most insightful, intellectual, creative, and talented musicians I have known. I was actually timid to make Skinny Puppy one of the first bands to reboot Song Of The Week. They are a band that deserves proper respect that can give good insight to their music. There are not many bands out there that have presented their style, evolved that style, and stayed true to who they are as musicians while maintaining a level of dominance in their respective part of the music industry. When you consider that they are one of the guiding forces in more than one base genre of music, it can be intimidating to review their music.

Much of Skinny Puppy's music can be a challenge for people to hear that are not used to Electro-Industrial or Experimental music. That is where Salvo comes in. As a song, it shows many of the best elements that are in both genres where a person can experience the music and not get overwhelmed by the aggressive abrasive nature of the music. For me, it is a song that I would play for someone that has no clue as to what these genres are and/or who Skinny Puppy is as a band. It can give them a sample of the band that can present many of the elements that are amazing with Skinny Puppy's style.