Dance With Me (Sebastian Komor Remix) by Alphaville 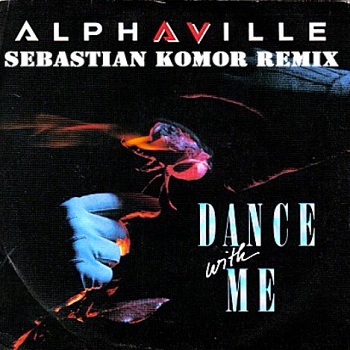 Who (Band): Alphaville is one of the cornerstones for New Wave music of the 1980's and its transition into Modern Synthpop. This German electronic band has traditionally seen as having peaked with the release of their album, Forever Young. The band has continued to release new material that has maintained their fan base in Europe. Even though they have lost the support in certain parts of their world for their newer music, they are still known universally for the massive impact they had in the global music world in the 1980's.

Those that have missed the newer music by Alphaville, they have truly missed out in the evolution of a dynamic band. As the music around them has taken a new shape, so have they. The fact that they have lacked the global support they had in the 1980's has kept them under the radar to many that still support the music that was widely distributed. Their tours in areas like North America haven't had the marketing they could and this has not only hindered the support Alphaville could have, it has also denied their countless fans from what one of the bands of their youth is currently creating.

What (Band): Alphaville is a band that many of the fans of their older music has been assumed to be no longer around. The truth in this is  that they are still a relevant force in synthpop and have had an constant influence in the respective music market as well as in other artists. The challenge that they have had is the lack of visibility in certain global markets. Some bands would accept this as a sign that they time has come and gone, but Alphaville has shown that they still  have a  ton of good music to create. They have also found different routes to spread the word that their music is still out there and worth listening to.

Why (Song): Many bands will distance themselves from their old music or will hold a death grip on the older music. In both cases they limit the fan base they could have and usually face extinction. Dance With Me (Sebastian Komor Remix) is a version of the original that their older fans and a new generation can both enjoy. This one song shows that Alphaville is a band that is willing to bridge  the older music with  the new and not be limited in any way.

Where (Song): Dance With Me (Sebastian Komor Remix) brings elements from the New Wave atmosphere and melds it into EBM, EDM, and Dance genres. This charged combo gives it the ability of being played in a variety of dance clubs, FM radio, and is a perfect song for any form of social gathering. The mastery of Sebastian Komor combined with this Alphaville classic gives birth to a song that Alphaville's older fans and electronic music fans will both love.

How (Song): Dance With Me (Sebastian Komor Remix) is simply brilliant in presenting a modern feel to a classic New Wave song. The song itself is one of the best in showing the best qualities of Alphaville as a band and their style of music. Sebastian Komor managed to make a version of the song that gives respect to the original version of the song, but also opens the door to where the music has evolved. If anything, Dance With Me (Sebastian Komor Remix) is a song that is the best gateway for those that love the original music and want to get a taste of where Alphaville is today as a band.