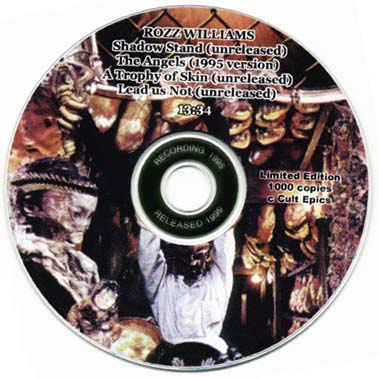 Who (Band): Rozz Williams is perhaps one of the biggest artistic musicians that set the stage for the transition from the end of Punk in the 1970's to the birth of Gothic Punk and Gothic Rock. His influences in music from the late 1970's through the 1990's would be felt in music today. Many bands that have ties to modern Gothic music, Electronic, Synthpop, Industrial, Cabaret, and even some forms of Jazz have drawn from the works of Rozz in one fashion or another.  To have such a widespread impact from a musician that started from such humble beginnings in California is inspiring to many that haven't had some of the breaks other artists have had. The level of dedication that Rozz has had in music and other arts has made him endeared by his fans, respected by other artists, and as a road map to other artists that have sought to start with nothing and end with a legacy.

What (Band): Those that know who Rozz Williams is typically know him from his main project Christian Death. What most don't know is that he had been in a large number of other bands, side-projects, and other artistic ventures. He also worked with a number of aspiring artists and had an impact in their development as a band. Many of these bands were only regional bands that were known in the Los Angeles area, but they had a ripple effect on other musical artists where the legacy of Rozz's knowledge was passed on. What makes all of this truly impressive is that Rozz Williams was able to hold true to the style that he developed in Christian Death, but also create other reflections of his music that drew into other genres of music without disrespecting the original creations that he had made. Even the later original music that he made was very unique in that it showed a progression of his music that still had strong ties to his older music without being landlocked by the passing of musical genres in the course of time.

Why (Song): Angels was originally a song by one of Rozz's side projects called Daucus Karota. Unlike the original song, this one was more stripped down and gave a different feel to the song that was less Gothic Punk and more Cabaret in its acoustic feel. This one dynamic gave Angels something that was different from the original version and could have opened Rozz to a whole new world of listeners. Just as he presented in the soundtrack to the underground movie, Pig, this song gives elements that are more elegant with a darker feel that could be related to some works by Danny Elfman. This style may not have been invented by Rozz Williams, but he did set many of the standards that have been used by other artists today through songs such as Angels.

Angels is unique in that it is a remake of the original song by the one that created it. That alone is a massive feat where the new version of the song is a distinct remake that doesn't dishonor the original version. For some artists this can be impossible to do as they are too close to the song. Where the original version of the song had a more punk ton to it and was more "loud"  with the heavier use of drums and guitars, this version of Angels is more stripped in its presentation. The key thing in this is that the stripped version sounds more cabaret and not like a song that has been raped by someone taking out instruments. This was partially in the addition to the piano and a slower tempo to the instruments and vocals. This combo truly shows the vocal skills of Rozz Williams and is a fitting tribute to him.

Where (Song): Rozz Williams did a number of songs with Gitane Demone, with side projects, and as a solo act that were very mellow in tone. Angels is one of the rare gems that was on a limited release that truly shows what he was able to do in this particular direction with his music. This mellower tone presents a style that would fit in any lounge, mellow sets in a club, or for someone that just wants to spend a quiet evening at home.