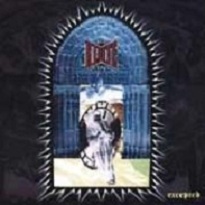 Who (Band): Klutæ has been part of the dynamic duo of bands by Claus Larsen (along with Leæther Strip). Leæther Strip is seen by many has the flag ship of the bands by Claus, but some of his most impressive music has come from Klutæ.

What (Band): Klutæ has had the advantage over Leæther Strip in that there have been no strict expectations on the music. Since Klutæ has always been seen more of a side project of Claus Larsen, the focus has always been on his other band. This lack of focus by the media and the fans has given Claus the special advantage to do songs that have been more personal in design. This can make for some truly fun creations for Claus, but also some incredible gems in his music.

Why (Song): Tequila Slammer is a remake of the classic song Tequila by The Champs. It is a revamp that shows the expertise of Claus Larsen in the harder rifts, but without losing the magic that made this song an all time classic. This rare combo is something many bands strive to do when they make remakes, yet Tequila Slammer truly shows the methods that should be made with a classic like this song. He managed to give a new dimension to this song that has been in a caliber with perhaps La Bamba as hybrid of Rock N' Roll and classic Latino themed music.

Where (Song): Tequila Slammer has the dynamic of fitting in any industrial rock, electro-industrial, and even many rock sets. This versatility is mainly due to the mastery of Claus in having Klutæ keep the main original elements intact through the evolution of this song. The light 50's dance feel mixed with the electro-industrial elements make Tequila Slammer a song that could be played in most rock and dance clubs in any of the parts of the Americas, and Japan (American Themed music). It could also see good playing time in a classic rock or industrial set in Europe. Since this is a resurrected classic song, all the lyrics are clean and makes it perfect for FM radio anywhere. This would be a perfect song for an industrial show or as a shakeup song for a classic rock station.

How (Song): As mentioned Tequila Slammer is a rare breed in the evolution of the classic to this version. This is something that Claus did with Leæther Strip's remakes of Soft Cell songs, but not one that is not related to the respective genres that he performs in. To evolve a song from an early era like Tequila and make it sound as it was an original song in the electro-industrial genre is not only impressive, it is inspiring. Klutæ has set a special standard in Tequila Slammer that any band that does a remake should strive for. The hard guitar rifts at the right moments along with the acoustic guitars ~ simply amazing!

Draven Taylor's Note: There are songs that are just simply addictive, and I have to admit that growing up I used to love the original for the fact that it stood out in a time where music was exploring many of the directions that could be found in Rockabilly and Rock N' Roll music. Tequila Slammer has been one of the songs that made me admire Claus Larsen and showed me that some of the songs aren't always the "newest trend setters." This song pays true homage to The Champs and shows that this is how a song from the Golden Age Of Rock would sound today. Klutæ is one of the immortal greats to me for the pure creativity that is in songs like this. Klutæ is the true God of playing the best of yesterday!