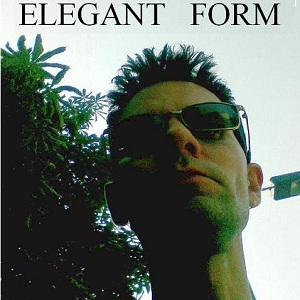 Who (Band): Elegant Form is a German band with a rich history in the electo-industrial, EBM, and ambient genres of music. The front man  Jan Pollock has been the core talent to the band and also the interaction they have had with countless bands.

What (Band): Elegant Form's focus has always been on the music and keeping it true to their own style. This has made some of the songs they have made even more out of the standard norm than most bands would chance. This freedom has allowed Elegant Form to explore styles of music and open doors for future music that has given them even more to draw from than virtually any band that is out there in any market.

Why (Song): Suicidal Ideation (Cyber-Teufel Remix) was part of a special venture of Elegant Form and Cyber-Teufel. Both bands were able to have artistic freedom to make new creations based on the songs of the other. Unlike the Remix War releases, this was something where both did their remixes for the sake of making a special remix with no consideration of marketing. This freedom has made Suicidal Ideation (Cyber-Teufel Remix) a song that is truly of a rare breed of songs.

Where (Song):  The ambient qualities in Suicidal Ideation (Cyber-Teufel Remix) make it a good song in a set that would be home to Hex Rx, Kevorkian Death Cycle, Numb, and some Skinny Puppy songs. The heavier forcus of electronic elements makes this one song different than those of the other bands. This makes it a good transition song from set to another where tempo or style change is desired.

How (Song): As mentioned Suicidal Ideation (Cyber-Teufel Remix) is a potent and creative standard that is different from the Remix Wars. It is also this freedom that shows the raw talents of two impressive bands fused into one powerful song. Some will like it, some will not, but all have to admit that the style and the design of the song is unique.

Draven Taylor's Note: Both Elegant Form and Cyber-Teufel are very talented bands that have placed their focus on the music and not making quick money. This has afforded them a ton of freedom as they have no one to answer to, but themselves. The double edge sword to this is that many bands that have done this have found that they have alienated many that would want to experience the music. From what I can see, this remix is different than other remixes and also of the songs that both bands have presented. Is that worse? No as this is something new that is easy to get into, but for some it will take a little getting used to.

Chop all the parts up, blend them into a frothy foam......swirl into a pumpkin smoothie... Tief In Mir by Elegant Form