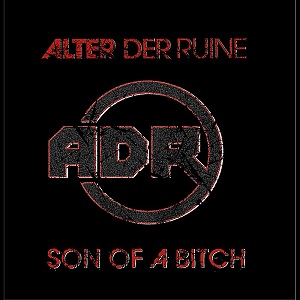 Who (Band): Alter Der Ruine are one of corner stones to both Negative Gain and also to the American electro-industrial and industrial ambient genres. They have been a long lived band that has been true to themselves and their music.

What (Band): If there was a band that could give the electronic dance tempo, the harsh aggression of industrial, and the chaotic free expressionism of ambient a run for their money - Alter Der Ruine is that band. Much of their music pushes the boundaries of genres in their unique style that touches what other bands do, but in a direction that has been symbolic to only Alter Der Ruine.

Why (Song): Really is from the newest album by Alter Der Ruine, Son Of A Bitch. Of the songs on the album, Really is one that strikes multiple genres in its own compelling and driven style. It is a song that shows what makes Alter Der Ruine the band they are and a direction that is truly intoxicating.

Where (Song): Most industrial ambient music is a challenge to play anywhere as it brings a level of harsh chaos that can be had to put into an industrial set and in any electronic set. Unlike psytrance, this is a genre that many either love with a passion or they never grasp. Really is a fusion that can actually fit in raves, dance clubs, and the radio. If you can play Combichrist or God Module, then you can play this song.

How (Song): Alter Der Ruine has always been a band that played their own style of music, but Really is one that is a special exception to their rule. It is a unique song and one that can be played anywhere. Really incorporates trance, ambient, and electro-industrial elements that few bands have been able to do. This song can go perfectly with Combichrist, Angels On Acid, God Module, Eisenfunk, and still brings a standard that can play in any Israel, Netherlands, or South Africa trance rave.

Draven Taylor's Note: Alter Der Ruine has been one of those bands where I like some of the songs and love others. Their music shows the fun the band has in making and performing their music, but some of it can be a challenge for some genres of fans to handle. Still, songs like Really show that this is a band that has songs that can fit in any dance club world. Simply put, all their music is not for everyone, but all their albums have music that will suit the needs of more than any would fathom.

Cover with a black silk cloth and say those magic words and Ta Da! You have something special! Relax And Ride It by Alter Der Ruine