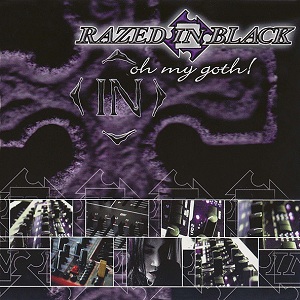 Who (Band): Razed In Black was the creation of Romell Regulacion. Starting under the name of Lost Souls in Hawaii, USA, Romell discovered that the label he was on (Cleopatra Records) already had a band on board with that name. Thus, Razed In Black was born. The band has had a number of huge hits in the US during the mid-90's through the early 2000's.

What (Band): Razed In Black was one of the bands in the music world that incorporated a number of aspects that were synonymous with Gothic music, trance, and in some of the songs metal. Each element wasn't in each song, but this diversity led to albums that covered a lot of ground. This also made Romell one of the pioneers for much of the music in a number of genres today.

Why (Song): Trance and house music has always had strong roots to the electronic music DJs. Part of this is due to their need to create ideal transitions from one song to the next and to ensure that the dance floors stayed filled. This transition translated to more people dancing and a renewed need for visiting the bar. This combo was vital for dance clubs and in turn became paramount for DJs to lay the groundwork.

The duality of drinks and good music have always lead to the foundation to a good club. This opened doors for many of these DJs and even the bands to explore new ways with the technology at hand to take this to a new level. The exploration created some massive leaps in music, especially in EBM, electronica, house, trance, dance, and many of the Euro genres.

Around this leap, Romell was both Razed In Black and also DJ RiB, and it was here that he began remixing much of his own music to fit the needs of the clubs according to his tastes. This approach as an artist first and DJ second made some dynamic songs and perhaps the one that he truly shines on isOh My Goth! (DJ RiB Trance Remix).

Where (Song): Like much of the pulsating and driven songs of the trance world,  Oh My Goth! (DJ RiB Trance Remix), excels in a club or rave setting. It is good for any setting, but truly anywhere where people can dance is where this song shines above any other song that Razed In Black has released to date.

How (Song):  Oh My Goth! (DJ R<I>B Trance Remix) is a song that by label is a trance song, yet even that isn't 100% the case. The beat and tone of the song fits the criteria, but the heavy use of original vocals makes this a song that also fits into other genres. Of all the remixes that Romell or anyone else has done,  Oh My Goth! (DJ RiB Trance Remix) has the guile of showing some of the beauty of the original, but with a special feel that only electronica, electro, house, and trance truly give.