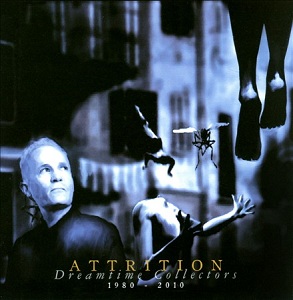 Who (Band): Attrition is an English based band that is fronted by Martin Bowes. He also is the composer, the vitality, and the reason that Attrition has been a band for the past three decades.

What (Band): One of the greatest challenges that any band is to not just be heard, but to constantly raise the bar from their previous works. Attrition  has proven that they are one of the bands that have a deep well of talent, inspiration, and passion when it comes to the diversity of music that they present. This can be seen in their first albums and the evolution that the music has taken in their latest albums.

Why (Song): Many people tend to think of the mellower songs by Attrition. Sometimes it is forgotten that they have a knack for presenting a potent mixture in music which reflects the intricate skill of Martin that is very symbolic to classical, and the rush of electronic melody that is the foundation to much of the darker music today. Lip Sync is more of a fusion of the new vision of Martin with the mood of some of his most impressive songs of old.

Where (Song): Attrition is one of the most diverse bands that can show their music as a form of Gothic classical all the way to a mix of dark wave and dark dance music. Lip Synch is one of his special songs that displays all of his styles in one and that can translate to a song that can be played in a variety of places. This song is one that can fit on a radio or a club set perfectly. Some ideal bands that would be good with this song would be The Cruxshadows, Die Form, and Butterfly Messiah.

How (Song): Much of music that is on Dreamtime Collectors is more of the mellow style that has been one of the hallmarks of Attrition. Lip Synch gives a harder edge without losing the tone that is Attrition. This makes this song one of the most standout songs on an album that is already superb.

Draven Taylor's Note: I originally discovered the talents of Martin and his band on a compilation. I had the joy of getting thrust into being a concert promoter when I went to help Martin and no one else would rise to the occasion. That situation was one where everything that could go wrong did go wrong, but also where I made an incredible friend in the form of Martin. It was a major pain experience, but one I would do every time again, having a friend and a talent like Martin in my life is worth much more than that. Since then, I have always been excited in what Martin's would next create. I am very proud to announce that Martin has expanded his passion in music to beyond Attrition. Something that we will proud present in an upcoming article!

Nothing else needs to be done, Martin is that good....