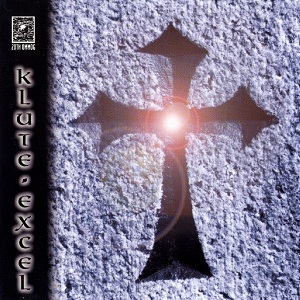 Who (Band): Klutæ is a band that is one of the artistic outlets to Claus Larsen, the same made that brought the world Leæther Strip. Klutæ was made as a means of not just expressing in music, it was a band that Claus made for the sheer fun he had in music.

What (Band): Unlike Leæther Strip, Klutæ is a band that is more driven in the music and shows elements that are more in the roots  of old school electro-industrial. This may not apply to all of the music, but it applies to a good deal of it that Klutæ presents to the music world.

Why (Song): Among the songs on Excel, Hey! Fuck Da'world is about as raw and up tempo as you can get in the electro-industrial genre. It is one that has a fun ton to the music and a almost raw way to thrusting the lyrics into your brain.

Where (Song):  This is one song that is a music for any industrial set, but if you are going to play it on FM radio you need to edit it for lyrics (as you can tell by the title alone). Hey! Fuck Da'world is a very aggressive and up beat song that can play with Ministry, Digital Poodle, Pigface, and ton of other electro-industrial and industrial rock bands. If you have a set like that for a club or a Internet station then this is the Klutæ song for you.

How (Song): Many bands have tried to hold onto the tone that was symbolic of electro-industrial and the elements that made it fun for many of the fans of that genre. These elements can also be found in the sister genres as well, but it was a magic that was truly found in the bands that called electro-industrial home. Klutæ has always been able to present this pure adrenaline rush in most of their songs. The melody of Hey! Fuck Da'world is extra unique in that it also has that special spark that was found in many of the other rebellious genres as well. Listen to some of the old school punk or rockabily and you will find elements in their tempo that are in Hey! Fuck Da'world. Even the agression in the lyrics are anti-authority like the those in the original punk songs.

Draven Taylor's Note: Claus is a mastermind when it comes to music and always knows how to drive his point home. With Klutæ's Hey! Fuck Da'world he does this perfectly. The fun and driven melody is infectious, the harsh lyrics, and the honest emotion with no social restraint is invigorating. If there was a song that could be the staple for a anarchist revolution, this would be it.

Put in a box, beat the snot out of it......add some gasoline and light the baby up! Throw on a slab of steel and serve in a loud room!