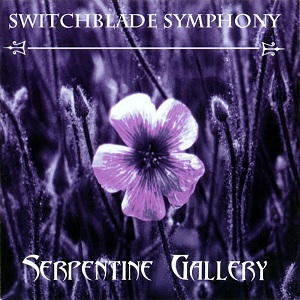 Who (Band): In the 1990's when one thought of Gothic music and San Francisco, they thought of Switchblade Symphony. With the haunting and beautiful vocals by Tina Root, Switchblade Symphony took the Bay area by storm. The United States was next to be taken by the childlike enchantment of music that was the Serpentine Gallery.

What (Band): Switchblade Symphony was one of the bands that truly set some bench marks for other bands. Being one of the bands that showed how the music would transition. This change from the Gothic rock of old to something newer where electronic influences would play a more vital role. That is why Serpentine Gallery has been one of the albums that a whole generation of Goths in the United States had in their collection.

Why (Song): There are many good songs on Switchblade Symphony's Serpentine Gallery. Any of them could have been the one that was chosen, but the one that was just slightly more impactful was Gutter Glitter. There was a point in the 90's where virtually every darker toned club played this song at least once or twice every week.

Where (Song):  Gutter Glitter was a trailblazer in the clubs and on Gothic and dark wave radio shows. It can still set a tone that. Switchblade Symphony's song can be played as a transitional song for any Gothic folk, Dark wave, or ethereal set into one of the others. It is also a good song to plus into any mellower EBM-like sets. With this mentioned, Gutter Glitter can be played in clubs and any format of radio.

How (Song): Many fans of Emilie Autumn, Rasputina, and other artists that had a combination of fairy tale feel and electronic music draws some level popularity from this one song. Much like Shoots And Ladders by Korn, this is a song that draws from the fairy tales of old and delivers a powerful presentation. This makes Gutter Glitter the one song that is on a level that few songs by any band can truly compete with.

Draven Taylor's Note: I had the joy of once knowing Tina Root (the lead singer of Switchblade Symphony). Just has her voice has a dark and sweet style to it, so does she. Even with the end of this incredible band, she has continued her career with two bands that she created. Tre Lux is more electronically driven than Switchblade Symphony and has one release (A Strange Gathering) that is remakes of a bunch of songs from the 1980's. One of these, originally by Depeche Mode, made it onto the soundtrack of the movie, Blood & Chocolate. Her other band is Small Halo, which to date has had one self-titled EP release. The music to Small Halo is more of an alternative rock feel.

Get a blonde Goth girl in a white lace Lewis Carroll inspired dress to mix it all and let set in the full moonlight...