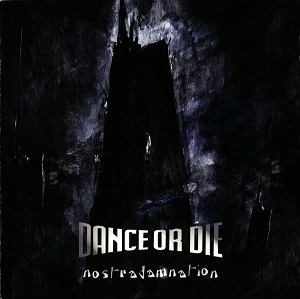 Who (Band): Dance Or Die is a German band that has been around since 1988. They have been a force in the electronic music world as they number of members has continues to grow and they popularity as taken the world by storm. Nostradamnation is  their latest addition of albums for the world to experience.

What (Band): Like many bands that call Berlin home, Dance Or Die has been one of those influenced by the electronic world that called Germany its mecca. The two disc album, Nostradamnation, has given a solid dose of what their fans have loved in their music. It also has some special remixes that have expanded the style of Dance Or Die into other related genres.

Why (Song): The Solitary Experiements remix of the song Dance Or Die is one of the best dance styled songs that has been created directly or indirectly by Dance Or Die. It also shows many of the elements of the original version in this pulsing and infectious version of the song.

Where (Song): Dance Or Die (Solitary Experiments Remix) is a song that needs to be in a club. It works in a rave, festival, or radio, but to give it the justice it deserves it should be in a club and played loud! This is a song that was meant for this remix (or the other way around).

How (Song): The original version of this song is mellower and is good song, but this version of it is just driven. It has the piano still in the song, the fluid melody, but combined with the heavy electronic dance influences shows the true potential of this one song. Dance Or Die has been shown a special direction with this song  and so have their fans.

Draven Taylor's Note: I have always liked Dance Or Die, but it is this one song that made me a HUGE fan of theirs. Usually I have many bands that I like and I can typically center most of them on either an album or a song. Dance Or  Die (Solitary Experiments Remix) is one of the hallmark songs that has made my list of all time favorite dance songs. I hope and wish that they continue down this path with their music (in addition to the thrumming darker electronic and fluid styles they already have). This remix has a strong dance vibe that is rare in this design.

Radiate with dance lights for a night....and you have it!