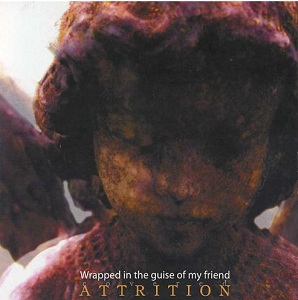 Who (Band):  The English band Attrition is one of the major influences in dark wave and dark electro music. They have been masterfully making music for their fans for the past three decades. The song was originally theirs that has been remade by the artist Chiasm.

What (Band): There are few bands that have had the level of influence as Attrition has in their part of the music world. The fact that their music has been made and performed by numerous bands and has inspired even more bands shows the level of impact they have had. The band's core member, Martin Bowes, has been an avid support of the bands of today and the fledgling bands of tomorrow.

Why (Song): Few songs by Attrition have had the level of success as A Girl Called Harmony has had. This one song has been heard on multiple albums by Attrition (mainly variations of the song), compilations, and is a staple for any tribute devoted to Attrition. If is fitting that this is the one song that is selected to best represent Attrition.

Where (Song):  A Girl Called Harmony is a impressive mixture of harpsichord and electronics. The Chiasm version is even more profound and can fit in any set that has dark wave, ethereal, or even as an interlude for a mellow electronic set.

How (Song): Replacing Martin's vocals with those of Emileigh Rohn drastically changes the mood of the song, but not for the worse. Martin's has a deep and rumbling voice in A Girl Called Harmony that is iconic to Attrition. the changes in a female vocalist along with some of the new sampling in the song give it almost an American McGee's Alice feel to the song. Truly, the artistic mood is transformed into something dark in a different form of elegance.

Draven Taylor's Note: When I first heard this version on the album, Wrapped Om The Guise Of My Friend, I wasn't certain of it. Not because it is bad, but because I have always associated the song with  the vocals of Martin Bowles. Adding a different element in a female vocalist took this one song that was totally revamped and made it into something truly unique. Much like a tribute, each song is different and sometimes the difference presents a direction that never could have been fathomed. Chiasm has made that one unknown direction, for the better.

Mix to the mood of tragic inspiration and elegance only found in the darkest of nights...