Making A Bomb by Miserylab 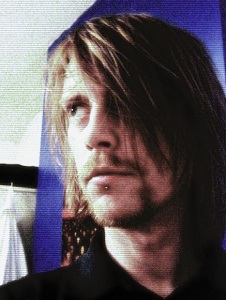 Who (Band): Miserylab started out as a production venture of Porl King. It eventually became an entity that would take his creative direction beyond the inspirations once found in Rosetta Stone.

What (Band): Rosetta Stone presented many of the aspects symbolic of a Gothic Rock band. Miserylab, however, presented an aspect where Porl could give expressionism to areas of politics, religion, and the world. These areas are of importance to him and are a message he shares with the world in the music.

Why (Song): Miserylab is the next chapter in Porl's music. Making A Bomb is perhaps one of the best that shows influences of what was Rosetta Stone and the foundation of what has become Miserylab.

Where (Song): The faster rhythm of Making A Bomb is good for both radio and club sets. The simple approach that he gives with a direct, yet calming undertone makes this a song that has a hidden potency.

How (Song): The acoustic guitar presents both in style and beat a style that is much like that found in songs found in Rosetta Stone's Foundation Stones. Perhaps this is a fluke, or perhaps Porl was showing that just as Rosetta Stone was making steps to greatness, Miserylab was bound for the same. Unlike the songs by Porl's former band, the rifts and the melody doesn't have the hard rock aspects. If anything, it has many of the aspects that are much like that of mellower EBM.

Draven Taylor's Note: I am a huge fan of Rosetta Stone and a long time friend of Porl. When I discovered that Miserylab was starting to make music of its own I had to hear it. Miserylab does has some ties to his older band, but as time progresses these have lessened as Porl has continued to evolved in a direction that is further from Gothic Rock. The progression of the music shows the evolution and the different visions that has inspired Porl as a person and a musician.

Cocktail (sounds like): 1 part Rosetta Stone + 1 Porl's unique guitar work + 1 part EBM styling + 1/2 Futurepop. Shake the Hell out of it and add a dash of political outcry, download it from the Miserylab website and play with zest.