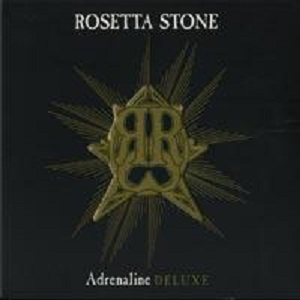 Who (Band): Rosetta Stone is a Gothic Rock band from England. They are comprised of Porl King and  Karl North and have been one of the enduring bands  over the course of dominance that the Gothic Rock genre had during the 80's and the 90's.

What (Band): Many bands in the Gothic Rock genre gained a level of visibility in their respective countries. Few were able to be known in the continent, and this is even more rare when they were known in the world as a whole. Rosetta Stone had achieved a global visibility by the time that their album Adrenaline was released. At this point the band had already toured with The Mission UK, had released over five albums, and had been in a number of compilations.

Why (Song): Adrenaline was the one song that pushed Rosetta Stone over the top. It was a song that gave them visibility in Europe, the United States, and even parts of South America. Adrenaline was also one of the songs that was paramount in the transition of the tradition rock set  up that was common in Gothic Rock to the more electronic feel that was gaining strength.

The album Adrenaline was the perfect tool in the music expansion of Rosetta Stone. In the United States it was viewed as the first album by Rosetta Stone, but it was actually a greatest hits of the band. This meant that the song Adrenaline wasn't the only hit, but had a cast of songs that were as solid as it was.

Where (Song):  Adrenaline was one of the emerging gems in the transition into the electronic feel in all the Gothic music. It  was one of the songs that fit perfectly in an older Gothic Rock set or something new in feel. This made Adrenaline one of the perfect songs for any Goth club and in some cases many other styles of clubs as well. The fast beat and aggressive dance mood of the song also made it good for radio as it didn't focus on the darker tones that were symbolic to much of the music in the Goth scene.

How (Song): The unique style of Adrenaline and the various versions of it made it one of the dynamic songs of its time. Perhaps only Rosetta Stone's Nothing and many of the songs on Nine Inch Nails' Pretty Hate Machine could rival this approach. It was also an approach that opened a large number of doors for bands of the future which were able glimpse new avenues for the music that Porl presented.

Draven Taylor's Note: I have seen Adrenaline played countless times. I am even guilty of playing it in the United States and Europe at clubs. The one constant is that it is one of the best transition songs I have ever used and is one that generally people love to hear. I think the only other song that has shown the ability of  fusing Gothic Rock, Electronic, and Industrial all in one happy set at that time was Headhunter by Front 242.

Cocktail (sounds like): 1 part essence of Gothic Rock, 1 part Madam Razor, 1 part electro-rock, and a fine line of a night club excitement. Combine in a martini shaker and serve.