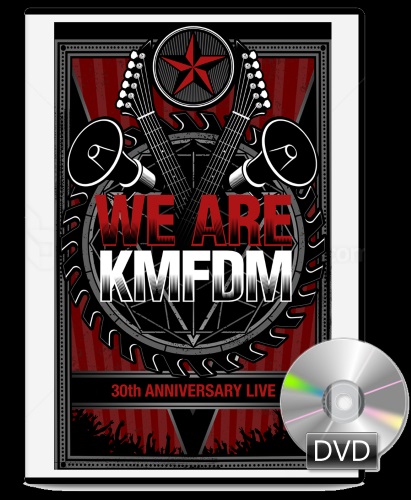 KMFDM's first live concert video recording in over ten years. Filmed on the last five stops of their 30th Anniversary tour in 2013, this is 90 minutes nonstop of hard-hitting KMFDM tracks spanning the complete three decade discography + includes 3 songs not on the CD. Limited Edition 1000 copies produced.

Over 50 hours of concert footage from over 40 camera angles - including body and guitar-worn GoPros - were used to create this frenetic deep-dive into a KMFDM show.

Also included is 40-minutes of exclusive behind-the-scenes interviews with each band member about the birth and life of KMFDM. Interview questions were crowdsourced from Facebook fans and offer a unique look into life on the road and in the studio with one of the forefathers of industrial rock.

We Are KMFDM! Limited 30th Anniversary Tour DVD can be yours for $20.00 (roughly 17,60€; roughly £15.77 GBP). By clicking here you can go directly to the page presenting this offer on the official KMFDM web store.