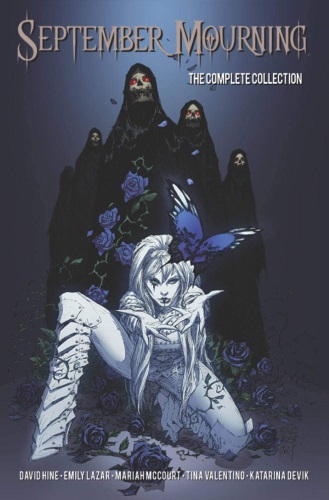 Bestselling writers David Hine, Mariah McCourt (editor of Emily the Strange, The Last Unicorn), and metal singer/songwriter sensation Emily Lazar (aka: September Mourning) team up with artist Tina Valentino to tell the story of a human grim reaper hybrid and her destiny in SEPTEMBER MOURNING. Issues #1-4 of the ongoing series, which first launched through Kickstarter, will be collected into trade paperback and available from Image Comics/Top Cow Productions, Inc. this January. In conjunction with the release of this book, September Mourning will be releasing new music via Sumerian Records, which will bring further life to the storyline.