Everybody Hates You by Combichrist 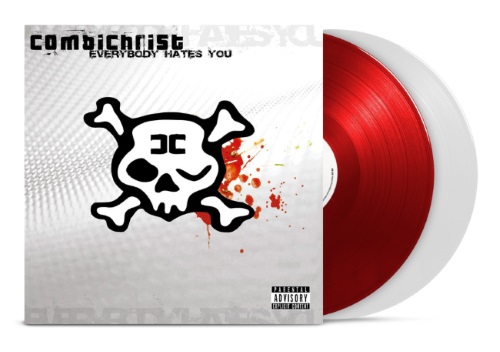 Combichrist are in the middle of their North American leg of their One Fire World tour. This tour comes on the heels of their latest album, One Fire. This is a time where Combichrist has little time for extras, but they have put a number of little goodies for their die hard fans.

One of their goodies is a re-release of their second album, Everybody Hate You. This release, however, comes in the format of a 2 LP Vinyls. This release comes with all the original tracks that were on the 2005 release. Some people claim that there is something special to the vinyl version of songs, and now you can find out for yourself with this special release of Everybody Hates You.

Everybody Hates you can be yours in this 2 LP vinyl format for only $49.00 USD. If you are still uncertain if this is a release for you, below is the official announcement from February 21st, 2005:

The next musical massacre by Combichrist comes in the form of a double album that is a twofold trip to the depths of the dark side of the human nature. CD1 is a musical martyrdom of thudding beats, head-splitting sequences and distorted, aggressive shouts in the best EBM-tradition. Provocative samples stir the listener up and make this an album that is not for the faint of heart.

On CD2, LaPlegua shows a seemingly different face. Decidedly ambient, Combichrist lure the listener into the false belief that they are now in for a chill out after being through hell and high water. The more one tends to follow his lead, the more one gradually notices that this is also just another facet of the same face. But then it´s already too late – then you´re already trapped in the sick world of the Norwegian artist now based in Hamburg. And suddenly, like little needles, atonalities and elements of sonic torture sting your ears. The listener cannot emerge from this horror anymore and pops CD 1 back into the player for another dose of concentrated musical madness that softens, indoctrinates and cuts him up. “Everybody Hates You” is like an acoustic mass murderer that you fear but whose lure you cannot escape.

The tracks on this 2 LP release are:
LP 1
A1 This Shit will fcuk you up
A2 Enjoy the Abuse
A3 Today I woke to the Rain of Blood
B1 I'm happy anyway
B2 Blut Royale
B3 Who's tour Daddy, Snakegirl?
LP 2


It hasn't been disclosed if this is a limited pressing or an ongoing one. However, most good things only have a lifespan before they end, and if you truly enjoy the music by Combichrist then it is best to hit this while it is still available. If you would like to get this re-release please click here.