Special Insight On Knock Us Down 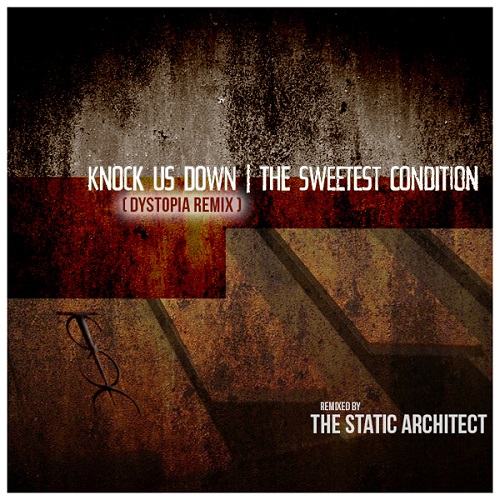 Here is some special insight on the free release Knock Us Down (Dystopia Remix by The Static Architect) by The Sweetest Condition.

" THE SWEETEST CONDITION is a female-fronted, industrial synthpop band based in Nashville, Tennessee. Leslie I. Benson (lyrics + vocals) and Jason Reed Milner (music + synths + guitars) blend iconic sounds of the ’80s and industrial muscle of the ’90s with cinematic soundscapes. Influenced by Nine Inch Nails, The Birthday Massacre, Depeche Mode and others, their newest album release, “We Defy Oblivion” (for release on Nov. 4, 2016), was produced by Joel Lauver of Burning Bridge Recordings. Their music can also be found on compilations from E-Con Records, Conzoom, Electrozombies, Side-Line Magazine, and more. "

" THE STATIC ARCHITECT is the musical endeavor of long-time San Diego artist Nick McLaren, and can be perhaps best described as an indie synth rock amalgamation of noise, guitars, electronics, and emotional vocals. A focused lens through which to experience sonically-interesting creative expression of stories, ideas, and emotions, wrapped in layers of grit and heavily-manipulated sound, invoking elements of familiar greats as Gary Numan, Nine Inch Nails, Depeche Mode, and others. Their self-produced debut album, “DISARRAY” (2016), was produced with the help of engineer Matt Reeves, also known as _HAULT_. " Watch You Fall by The Sweetest Condition Knock Us Down by The Sweetest Condition Knock Us Down (Dystopia Remix) by The Sweetest Condition