Out Now! How The Ghost Became by Freakangel 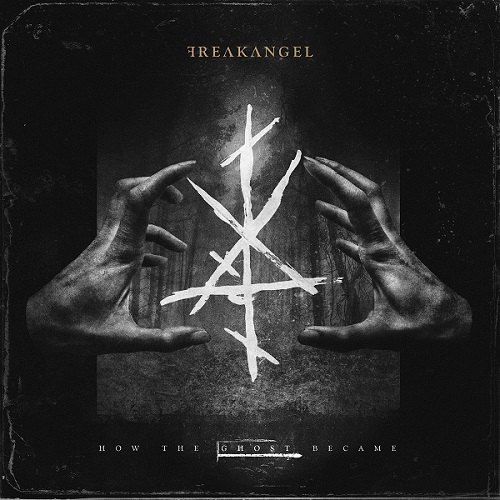 " Over the past several years, FREAKANGEL have toured relentlessly around Europe – mutating in the process into a full four-piece live rock act, and acquiring an ever-increasing number of fans (and tattoos). Aside from numerous headline performances, they have also appeared at a huge number of industrial and metal festivals like Resistanz (UK), Wave-Gotik-Treffen and Dark Munich (DE), Hard Rock Laager (EE), Summer Darkness (NL), Castle Party (PL), Lumous and Findustry (FI) alongside acts like COMBICHRIST, LORD OF THE LOST and most recently RAVE THE REQVIEM. "

" “How The Ghost Became” seems almost light years removed from the dark electro sounds of FREAKANGEL’s 2010 debut “The Faults Of Humanity” – finally taking what has now become a full band firmly into metal territory, and quite definitively so. Dmitry’s singing, now freed from distortion, has never sounded so powerful nor his vocal range so wide – and no album has ever come this close to capturing the full ferocity of FREAKANGEL’s live performance. "

" Songs like “Make Me Disappear” have probably more in common with MOTIONLESS IN WHITE or MARILYN MANSON than anything remotely considered “electronic” – while those hoping for a more four-to-the-floor groove will find that fused with this super-heavy new FREAKANGEL sound in songs like the album opener “Witness The Fall”. Even a passing nod to the club-friendly FREAKANGEL of old is included in the form of the groovy “Giving Up The Ghost”- where the band perhaps take one last dance on the graves of what they once were. "

" Undoubtedly this is FREAKANGEL’s finest hour – and as such fully warrants the deluxe treatment that only DWA’s superlative hardcover digibook format can provide. Fittingly then, the first 300 CD copies of “How The Ghost Became” come in digibook complete with 16-page integral booklet bound into the inside left of the hardcover. The outstanding cover and interior booklet artwork comes from Russian-based Mayhem Project Design - capturing perfectly the dark oppressive atmosphere of the album’s music in its monochromatic tones and broken text. "

" With “How The Ghost Became”, FREAKANGEL have fashioned an album of rare beauty where raw and emotional rock sits smoothly alongside electronic elements to form an entirely organic-sounding whole – and one which adds up to so much more than the sum of its parts. Setting a formidable new standard in industrial metal, this is an album that even FREAKANGEL themselves may find hard to follow! "

Below you can hear the latest release, How The Ghost Became, by Freakangel. If you would like to purchase this album this can be done through the Bandcamp player below for only $9.00 USD. Death Walks With Us by Freakangel