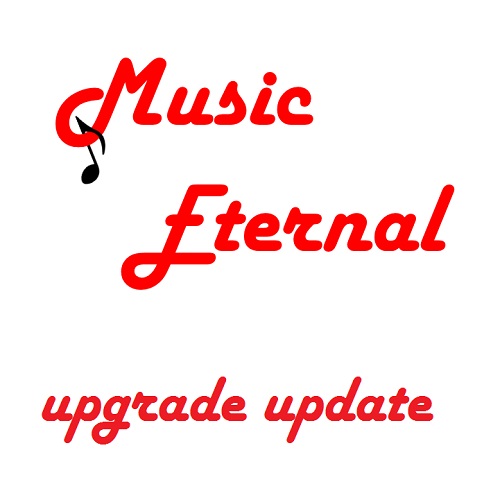 Music Eternal was created as a means of solving many of the problems in the music world. This site was just the first step. It has had a level of success and a number of failures in achieving the goals that were set for this first step to this business.

Rather than giving up on these failures that have surfaced, we have looked in the box of conventional solutions and outside of the box. It is this approach that has made more work on this initial step and has been one of the delays in the progression of Music Eternal as the imagined direction for the business as a whole. 2017 marks the year where many of these changes are now changing.

This year we have brought in one of the keen minds of Microsoft's think tank to work exclusively for Music Eternal. This individual brings a wealth of knowledge and resources that are now being involved in the next evolution of the Music Eternal site. This next step will lead to many other progressions beyond the site as we aim to completing the bulk of Phase One of Music Eternal in 2017.

These changes present two tidbits of information that we are now allowed to present to the public. The first is what are these Phases that are referred to by Draven and other members of the Music Eternal staff? Traditionally Phases are a set of steps that are met before a new chapter in a project are met. Music Eternal as a site was the first of a set number of groups of steps where we as a group strive to have an impact in multiple areas of the music industry and music world. These changes will be beneficial for all that are involved in Music Eternal as its respective members. These members will be at ground zero as we implement changes in various areas of the music industry that will help them in ways that are obvious and some that we see that have never been directly addressed by the music community as a whole. As we approach the apex of Phase One and the start of Phase Two we will give more insight to this as how it will apply to each member of the music community and their fans.

The second tidbit to be shared is this site and how it is changing for 2017. The addition of this powerful guiding force from Microsoft is leading us into a new version of the Music Eternal site. This will not be a gradual change to the site, but a massive presentation to a new version of the site that will have a variety of new additions. Most of these we can't tell yet as it is bleeding edge technology, however, we can tell you about the following changes that will be 100% certain additions to Music Eternal.
1) Each member will have full access to their own profile and how they are presented on the site.
2) New standards in marketing through the profiles and Music Eternal to get you a bigger voice in multiple social medias
3) Educational information to give you a better understanding of how the site works and the best practices to marketing what you are presenting (concert, new album, etc.)
4) New standards in marketing that will use the Internet marketing standards in the Americas, Europe, Asia, and Oceania with a better result
5) Better interlinking to multiple accounts on Music Eternal and other social medias


This is just a small glimpse into what we have planned for everyone. The new site will have all that the current site, but will better functionality and more resources for those that are part of the Music Eternal family. Some have worried that this will come with a change in our fee structure, and you have nothing to fear. We have been free and will forever be free to those that want to be part of Music Eternal family.

This little preview of what is coming through Music Eternal is a lot of information and we will be doing such updates on a monthly basis (on the 20th of each month). This way you can see what is in store for those that are part of the Music Eternal family. U.S. Federal Government, Copyrights, And Everyone