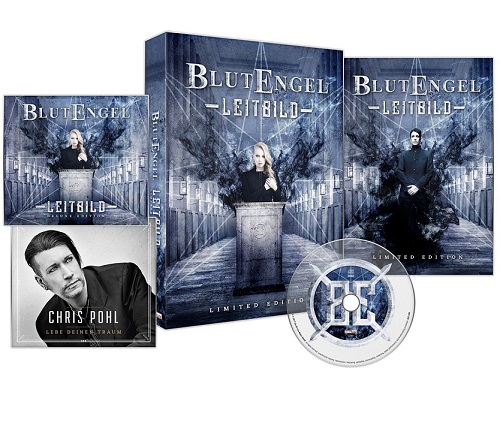 " Live your dreams! Blutengel mastermind Chris Pohl would have probably never dreamed that he would become one of the most influential acts in his genre and beyond in less than two decades. Now, Blutengel have completed work on the eagerly awaited follow up to their German-top-5-success “Save Us” (which went straight to #4 of the charts.) The title “Leitbild” (a German word for “overall concept” or “role model”) couldn't be more fitting, as the album is evolution, revolution, a testament to the group's maturation, a maelstrom of emotions and the most direct, honest and gripping experience that the Berliners have ever treated us with. It makes you feel right at home, yet the more you listen, the more previously unknown sides you uncover. To make it simple: “Leitbild” is the essence of Blutengel, condensed into an album! "

" The holy grail of “Leitbild” editions is the limited fan set. I comes in a classy glossy print ardboard case and contains the double CD edition plus the following exclusive content:
- A lavish shape MCD available only in the set. It features a rework of the hit “Anders Sein” plus two songs off “Leitbild” in captivating acoustic versions. The disc itself is an absolute gem featuring the Blutengel-”Leitbild”-logo on a crystal-clear-see-through disc.
- “Chris Pohl – Lebe deinen Traum – Das Hörbuch”: an exclusive double CD (German language, only) that tells the story of Chris, Blutengel and all his other music projects, in his own words, narrated by Chris Pohl himself. A myriad of personal insights – you have never been this close to Blutengel and Chris before.
- The album artwork and all lyrics are featured in a deluxe DIN A5 photo booklet.

The “Leitbild”-box will give you the complete fan experience! "


Leitbild can be purchased for €37.99 (plus shipping and any other charges) by clicking here.