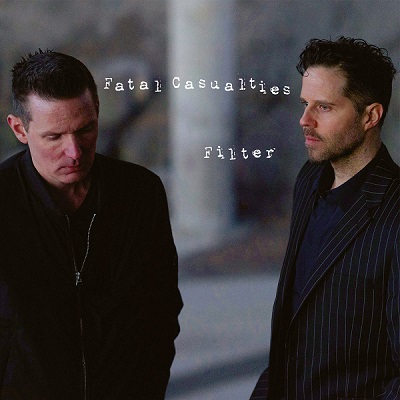 " Ivan & Stefan are go! A steaming future already lies Fatal Casualties , which may be assumed. After the vinyl album ‘Psalm’, released in 2014 there was a deafening silence… until now…! Fatal Casualties strike hard with a brand new CD album in this dull year of pop music. Where the previous album showed us the deepest black, Fatal Casualties appear to be more light-hearted in 'Filter'. "

" The band shines with atmospheric songs full of squeaks and creaks accompanied simultaneously by understated but often danceable beats and melodic electronica. Fatal Casualties' sound requires it’s very own definition: the simple approach is to call it electro or dark-synth but in fact you can't pin this music into one specific genre. No matter which label might fit, Fatal Casualties' music is purely electronic with an industrial and minimal background which express itself with a mystical and poetic touch. The lyrics again are in Swedish and English and occasionally in Finnish. Those who will dive into the lyrics will discover that these are relevant and apply an additional poetic layer. This deep layered album is beautiful, complex and magnificent on all levels - highly recommended. " No Heaven by Fatal Casualties