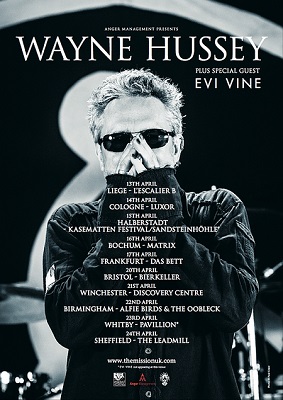 Wayne Hussy of The Mission (UK) his performing at a number of select venues in Belgium, Germany, and the United Kingdom. At most of the German venues he will have special guest, Evi Vine, performing the same night.

Those that haven't had the chance to experience The Mission are in for a special treat. This is one of the bands that brought Gothic Rock and injected with a special representation of Accoustic Rock. It is this combination that the band has not only mastered, but shown in a stunning fashion that has made many of their songs timeless for fans of the past and new fans of today.

Wayne Hussey has been the vitality of The Mission and it is his passion for music and life that shines in his songs. He has worked with charities for worthy causes and performed all over the world. He has always given a personal experience through his music that has made his live shows rare gems for those that attend. These performaces are ones that should not be missed.


The Mission UK - The Girl In A Fur Skin Rug:


The Mission UK - God Is A Bullet: