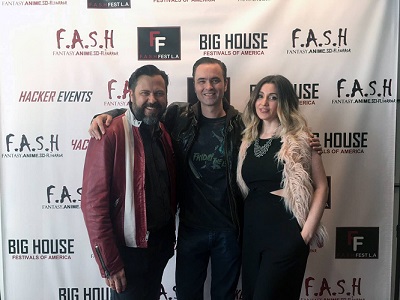 Thank you to everyone who came out to the F.A.S.H. Film Festival this weekend to see Dry Blood. We had two packed back-to-back screenings! Kelton Jones took the Best Director award, and I won Best Actor! Very big thanks to Edward, Gerald, Zach, Shane, Josephine, and everyone from the Festival for putting on such a great event. I was so happy to see so many of the people who helped make Dry Blood in one place! And it was also a treat to show my film alongside Byron C Miller's "Anatomy of Monsters." and Lee Boxleitner, Sam Boxleitner, and Matt Laumann's double feature of "Downstairs" and "Die Sitter Die: Rupert.”

The photo above is of the red carpet event prior to the showing. In the photo (from left to right) are Director Kelton Jones, Clint Carney, and Jaymie Valentine. A cast of Clint and Jaymie made Dry Blood a masterful movie under the watchful guidance of Kelton Jones. It was this combination that made the movie one of the heavy hitters at the F.A.S.H. Film Festival as it pulled in two of the top sought after awards. As mentioned by Clint, Dry Blood earned the Best Director and Best Actor Award.

Hopefully, Dry Blood will get the attention that indie movies like Blair Witch gained. This will ensure that the movie will have a major company involved in the distribution so that the fans of Clint Carney and System Syn will be able to see this impressive movie. If this takes shape it should be in the near future.