Thank You To One-Eyed Doll 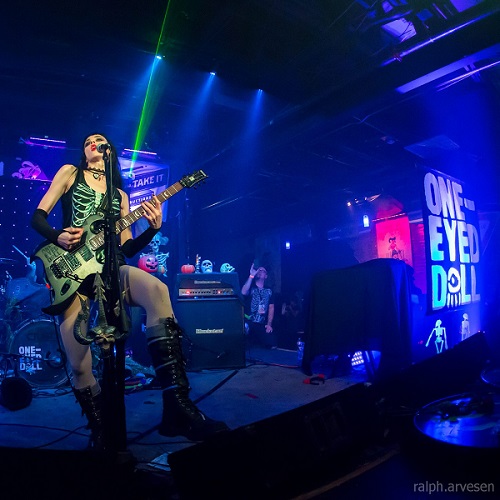 Music Eternal wishes to thank One-Eyed Doll for being our October 2015, Band Of The Month. With the album and multiple tours this year we know they have had a lot going on with the band and that they have been invovled with what we do at any level means the world to us.

The Halloween Tour for One-Eyed Doll just finished, but they are far from done with their labors of love. The plans they have now is to hit the studio and begin work on their next album. If it reflects what their last album, Witches, and their tour has shown, this will be an amazing album.

Those that had purchased a VIP pass or have seen them in concert experienced a more personal aspect of the band and were able to see first hand the level of love they have for their fan base. Photos litter the social network of Junior and Kimberly with their legions of fans. These are not a PR campaign, they are posted by their many fans as a means of saying thank you for what these two have given in time, effort, and in kindness to those that have embraced their music. This one on one approach that they have given in each concert and in each fan is one of the countless aspects where One-Eyed Doll has been a symbol of what a music is in the modern day.

For all that they do, we humbly sasy thank you to both Kimberly and Junior. You both are inspirations that music will never die and that it should be from the heart. Thank you for being part of Music Eternal and for being our October 2015, Band Of The Month.