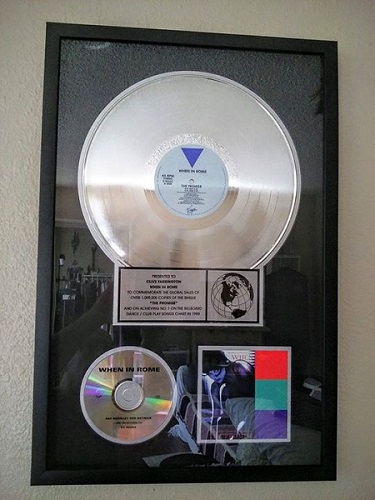 Clive Farrington, vocalist for When In Rome, was given a special distinction in the award shown above. This is what is given to an artist that has had one of their albums go platinum. What these means is that the single, The Promise, had sold over 1 million copies. This is a special feat that many artists aspire to reach and a lucky few are able to achieve.

Some will dismiss this achievement and never comprehend what an honor it is to have. In 1988, The Promise, appeared on the Billboard Music Charts for 3 categories. It reached #19 in Hot Dance Music/Maxi-Singles Sales, #11 in The Billboard Hot 100, and it peaked at #1 in Dance Music/Club Play Singles. 1988 was of two years that When In Rome dominated the music charts with three songs with The Promise setting the standards for the band.

For this achievement we wish to give heartfelt praise to Clive. This honor represents one chapter of his life, but not the final chapter. He continues to perform in the present with classic music from When In Rome and music that he still creates today. We hope that you will listen to the video below and experience one of the songs that was one of the reasons that the '80's were so magical in music. Everything by When In Rome (UK) Somthing Goin' On by When In Rome