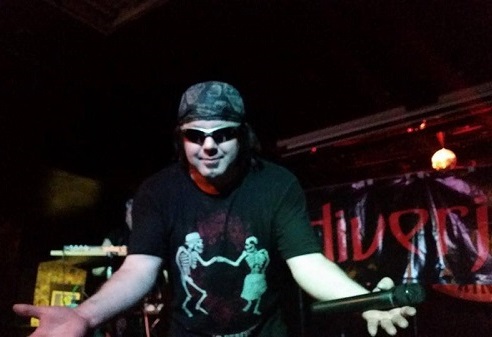 New Mexico has been famous for being the old stomping grounds of Billy The Kid. Today it has another big kid on the block in Tommy T. Rapisardi. To have the level of devotion in music as Tommy has he would either have to be a kid in the best ways or a little bit insane. Maybe he is a special combination of the two considering that he owns and runs DSBP Records, has a band (Diverje), works on countless side projects, and DJs. As a DJ he brings all the best there is in Industrial, Goth, and Electronic music to the Old West via the Internet and FM Radio through his epic radio show, Cyberage Radio on KUNM Radio.

For almost 20 years Tommy has taken over the air waves within the "Land Of Enchantment" and shared a vast collection of good music to an impressive fan base. As a label owner and musician, he brings forth a unique perspective and love for the music that few DJs can. It is this approach that has earned him a special spot in the hearts of his fan base and has given him purpose to stay on the airwaves much longer than standard DJs are able to.

Tommy is a very respected member of the music community and he has shared his wisdom in helping bands globally. It is as a DJ that he is able to share his love in music to the fans and to give something to that part of the music community that shows his support in everything he does. Tommy truly is an inspiration to those that know him and someone that shows that there is good people where it matters most. In the art that touches the heart. Listen And Chat On Cyberage Radio!