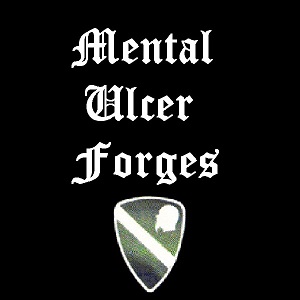 Almost two decades have passed and Mental Ulcer Forges has been a standard in music that has been a huge help for the bands that wanted to rely on the resources that Rudy has developed. The fact that he has not made the label explode in growth has meant that he has been able to focus on the direct needs of the bands without sacrificing the more one on one approach that he has always shown in everything he has done. The management of the label also means that he has had the ability to focus on his own music and keep in touch with the music world that has given him so much. It is this balance that has made Rudy Ratzinger a rarity that every aspect of the music world has admired and appreciated. There is only so much time that he has to devote to everything, yet he has shown how effective with the time he has to do what is needed for each label and his band. It is this superior management; unique perception as an artist and label; and his devotion to all that he loves in music that has earned him a reputation as one of the key players in many of the sub-genres of Electronic music.

Rudy is a great person and someone that shows his devotion and love to the music that he has in his life. Many are grateful for his involvement in their careers and that is proven in how long his band, labels, and other ambitions have lasted. Perhaps lasted is a poor word since Rudy seems to always raise the bar in everything he does. His involvement in the music world shows how he exceeds expectations and thrives as time passes on. Rudy truly is one of the vital chords in the music that lives today. Ghost Myself by Diamante