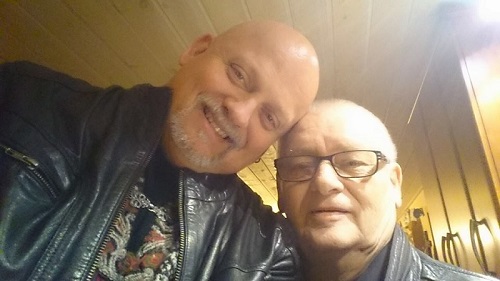 The family that comprises the Electro-Industrial band Leæther Strip had a recent scare to one of their family members. Kurt, the source of the creative fire within Claus had suffered a stroke earlier this week.

To the great surprise of the medical field in Denmark, Kurt bounced back and is showing all indications of having a full recovery. This is a huge blessing for this duo that have given so much to each other and to the music world.

Both Claus and Kurt have expressed heartfelt thanks to all their friends and the many fans of Leæther Strip that have extended the wishes for Kurt's recovery. It has been said that in the most dire of times a person can find their most true of friends. Claus and Kurt have been shown that the music community and their circle of friends are there for them when one of them was stricken with a dire situation.

In an official statement, the band has also expressed that they will not be canceling any of their future performances.

Both have shown even in the hardest of times, their many supporters are a part of their family. This dedication and love for their fans and each other is why Leæther Strip is a band that will never be forgotten. It will never be lost in the passage of time as it is a reflection of the timeless love these two great people have in music and in each other.