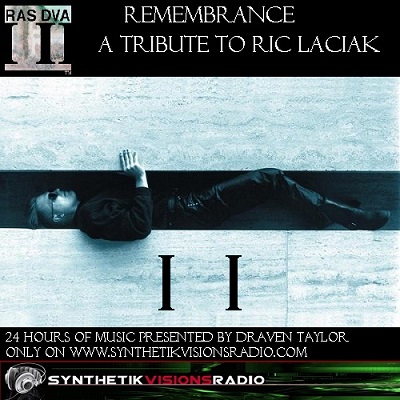 It has been just over a month since Ric Laciak passed away. I know this is challenging times for those that were his friends and his family. For me this tribute is something that has some meaning, enough meaning that it will be aired again in a very short time. To gain perspective on this I have a story to tell you....

In 2011, I was struggling to get this site going with two partners, my mother and her counterpart, Richard. In this time it was only radio shows, countless hours of coding, and having the high note of getting to know more of the music community. In many respects I was mired with the reality that this dream would only be a dream. The site was heading to its 6th rewrite due to the lack of focus and commitment of the last programmers involved. They wanted money, but lacked the desire to make the dream a reality. It was in this time that I would study like a college student just prior to finals and whip out the latest stable version of the site that would come to life in March of 2012. It was this very style that recently had the upgrade and is what we have today.

During this time of chaos in my life, a friend and station owner of Synthetik Visions Radio, Ken Collins, introduced me to Ric. Ken had told me that it was Ric that had masterminded the birth and growth of RAS DVA Records. That RAS DVA was the baby of Ric's, much like Music Eternal was to mine. For both of us, our babies were not ours to flaunt, but ours to help others. It was this foundation that helped Ric and I develop a solid friendship that expanded to others we knew like Roger Jarvis, Sean Whitman, Tommy Rapisardi, Claus Larsen and many others. It was this little family that I found direction and faith that what I was doing had merit and that it wasn't a fool's gold for a dream that was unreachable. As Sean Whitman had once told me, "If you are going to aim, better aim for the stars." Much like Ric's sagely advice, these words resonated within my soul and have been part of the guiding for in making Music Eternal a beacon to help the artists and the music world as a whole.

Ric and I have spent the last 3 years connecting and missing each other in a kind of cycle. It always seemed that when one of us needed the other we would just start chatting like time never passed. One event happened this year that would shake my foundations, jeopardize Music Eternal, and bring my world to a screeching halt. My mom, Zia Taylor, who is my best friend, my mentor in life, and my business partner suffered a lethal stroke. By some good grace she survived, but not without a grim cost. It was at this time that I lost all motivation and lost all sight of the dream that Music Eternal was laying claim to. In that one event in July, the music in my heart stopped and I didn't know if I would ever hear it again.

A couple close friends and a few family members tried to be there, but it was Ric that came out of the blue and like always started chatting with me. Except this time he knew something was amiss and despite the pain he was in, he was the friend that I needed to lean on. It isn't that the others lacked anything, it was that Ric was someone that was my peer and sacrificed more than time to be there. It was that I knew he was in pain and yet that pain didn't matter when he knew I needed someone. That unconditional love in friendship was something that words can never describe and it has been something that has humbled me more than anything in this world.

After three months, Music Eternal started to lurch forward again. As I pulled my world from the ashes with the support of others and the wisdom of a few dear friends I was able to gain my perspective again, Through all of this, Ric didn't focus on his health issues, he focused on our friendship and in essentially kicking me in the butt in a fashion that helped motivate me again. Ric was one of the people that re-lit my pilot light and got the passion raging again to make the dream come true. If Music Eternal is my baby, then it had major help through Uncle Ric and the many people that have stepped forward in all of this.

As things with Zia were reaching a plateau of sorts, Ric passed away. Both happened literally on the same day. It was almost as if Ric had bartered to be here long enough to make sure that I was able to get everything back in motion. Sure the road has been bumpy and mistakes have been made as I am taking on more of the roles that Zia had as well as my own, but were it not for Ric I am not sure I would have rediscovered the strength in this.

There may be many possible reasons in the timing of when Ric passed. This next chapter may only be a series of coincidences, but I  believe that it was something more. There are no coincidences in my book, and were it not for Ric (and a few others), the book on Music Eternal would be forever closed.

I do want to give thanks to the many new friends I have made in the first airing of the tribute, some of these people have become very close to me and shown me a special light in the music world. I also want to send the warmest of wishes to Marsha, Liz, and the Laciak family. They spent the time to share with me and give me a perspective of Ric as a label owner, a DJ, and as a person I never knew. They complimented the image of the amazing friend I had and showed that his kindness lives on in his family's hearts.

In closing, I hope you will enjoy the second airing of Remembrance (I & II like RAS DVA), and will spend this time with me remembering Ric Laciak. We all know that he has passed, but he is never forgotten. Remember the days he lived, the lives he touched, and the kindness he gave no matter what. Let him be an example in life and in the music world for what it truly means to love others and the music we all share.