Listen to some tracks from the album on our bandcamp page.

And Holiday Cards! That's right, it's that time of the year. So indulge yourself, or your loved one, with this beautiful and tactile treasure. At many of the pledge levels I'm going to write you out a holiday card that should show up right before Xmas; my way of saying 'thanks' for believing in Black Tape For A Blue Girl and getting involved.

(Outside of the USA, your card will probably NOT arrive in time for Xmas, unless Santa is working extra hard!)

The music business has changed drastically in the 17 years since the release of Remnants. The way I see it, (for underground artists) the music business is now a patronage system. Instead of Kings supporting the arts, you - the fans - are the patrons of the art you love. I have created three Kickstarters - all of which have funded - and I am amazed and thankful to have fans like you who care enough about what I do to support my art.

Back in 1996 when I recorded Remnants with Oscar, Lucian, Vicki and Mera, we had no idea the album would touch so many people and have such a lasting impact. It feels really great to be here, almost 18 years later, getting ready to celebrate Remnants again. 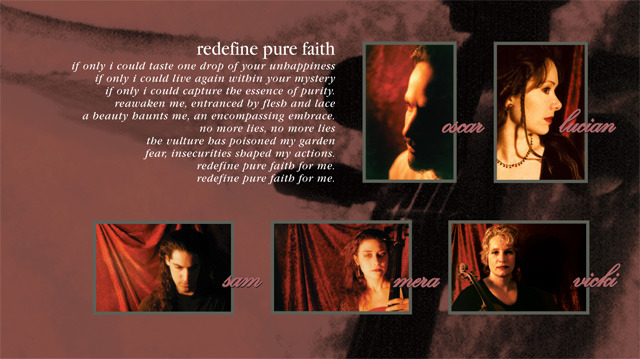 Why should I get on board?
This vinyl release will only fund if we make our $7000 goal. Getting involved at any pledge level increases the chance this release becomes reality.

You might wonder why I am asking for $7000
Simply put, $7000 is the minimum this release is going to cost! The vinyl pressing + jacket is $4155 at Furnace MFG. The 8 page booklet is $1700. The mastering is $350 (and there's a pledge level for that one special person who wants to sponsor the mastering). Pressing the CD to include in the package is $400. Plus the cost of shipping the vinyl and booklet from the plant to me, and the shipping of the prizes to you, and the 5% that Kickstarter takes, and the 3-5% that Amazon takes to process your card, and the... and the.... It all adds up, doesn't it ?

$350 for Mastering? Really?
Yes. Talented people deserve to be paid for their quality work. Last year, Mannequin Records in Italy released my Tanzmusik album on vinyl (there are still a few copies left, here). Mannequin connected me with Anders Peterson at GS Mastering & Post (www.ghostsounds.net). Anders did such a fabulous job preparing the Tanzmusik files for the vinyl pressing, that I knew I had to have him on this job. I want to get you the best sonic experience of Remnants of a Deeper Purity.