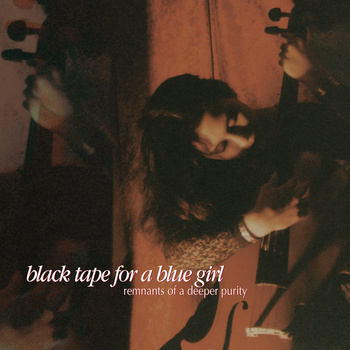 We're down to the final hours on the Kickstarter campaign. You can be part of the team that crowdfunds the 2-LP swirled vinyl edition of Remnants of a deeper purity . . . and get your name inside the booklet!

$50 gets you the vinyl. There are less expensive premiums for downloads & CDs. And you can also chose from additional options that include a signed holiday card from me (Sam)! This makes the perfect Xmas gift for that Black Tape For A Blue Girl fan on your list, and you don't even have to leave the house! : )

People often ask if I am going to put out something from Black tape for a blue girl on vinyl. In fact, there was vinyl years ago for the first two albums. But that was a different era, and now it's time for us to put out vinyl again. When I say "us," I mean you and me; because together, we can make Remnants of a deeper purity exist on vinyl. It's your support through the pledges (to the right) that will raise the money so this project can happen.

Blacktape's 1996 Remnants album is the best seller for the band; and not only that, recently on Facebook the fans voted it their favorite album. It's the perfect release to put out on vinyl.

Remnants is a long album (77:10 minutes); it's going to be a double-lp. And if you ask me, the only way to go is deluxe! 140-gram marbled red & clear swirled vinyl, a copy of the original 9-track album on CD in a paper sleeve, and a luxurious 8 page album-sized booklet. And everyone who picks a premium that includes the vinyl gets their name in the booklet!

Keep in mind that the Kickstarter only works when we hit our $7000 goal. So it's your support, and spreading the word, that is going to get the album funded.

“Like Dead Can Dance, black tape for a blue girl dramatically flirts with symphonic decay.” - The Philadelphia City Paper